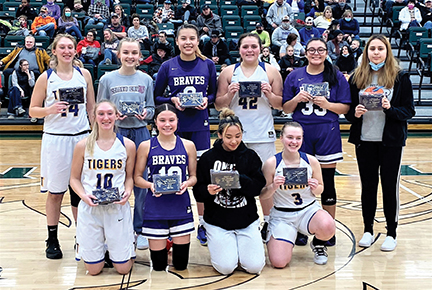 The girl’s teams of MHA Nation provided heated action on the gym floor that belied the bitter cold outside in every game they played at the District 15 Tournament in Williston last weekend. A ‘Clash of the Titans’ of the district happened in the championship game on Saturday that pitted the Parshall Lady Braves going up against the Trenton Tigers.

From the opening tip, it was a pitched battle and the Lady Braves led early in the extremely fast-paced game with stifling defense from both teams. Parshall’s Ivy Fox hit some nice inside shots as Jayln Hall brought the ball down setting up the offense despite heavy pressure on her by the Tigers backcourt defense. Fox’s strong inside game and Hall’s speed kept Parshall looking like they may pull out the win with what appeared to be a well-executed game strategy.  At the halftime buzzer, the game remained close at 21-16, even though the Lady Braves went cold scoring only four points in the second quarter. In the third quarter, the Tigers defense caused some turnovers and the momentum swung towards the Tigers going up on the Lady Braves by double digits. The Parshall team could not make up the point difference despite a valiant effort in the fourth quarter finally dropping the game by the score of 58-44. Fox and Hall each scored 18 points in the finale. The Lady Braves earned their trip to the championship game with a great team effort on Friday with a solid victory over Williston Trinity/Alexander winning handily by the score of 64-38. Leading Parshall in that victory was Winter Old Rock with 16 points. Isabella Driver had an outstanding game pouring in 13 points for the Lady Braves and joining in double figures was Jayln Hall with a dozen points. Ivy Fox had 8 points and Alyssa Haakenson was good for six points for Parshall. Lady Brave Emily Fixico pitched in with 4 points in the game.

“The game was intense, and we had some great moments but (Trenton) is so experienced and they kept their composure. The biggest asset of Trenton is that they adjust so well and have some very good ‘go to’ players – and of course, we have ours,” Parshall head coach Mel Four Bear stated. “People tend to forget that the bulk of our team is made up of freshman and sophomores but our whole team plays as hard as they can. I am very proud of them and in some people’s minds, they think we are a rebuilding team because we are so young. But the ultimate goal is to play for a state berth, and we are capable of that. Anything can happen in region and I’m looking forward to the tournament this weekend. The girls are here at practice right now ready to go to work and I can’t praise them enough for their great attitude and character. We could very well give ourselves the opportunity to win this weekend.”

The Lady Braves will open up the regional tournament at the Four Bears Event Center on Monday, February 22nd against the Stanley Blue Jays.

In the first region qualifying game on Saturday, the New Town Eagles played an inspired game against the Wildcats with good passing and creating open good open shots. The Eagles lost on Friday to the eventual district champion Trenton girls in the semifinals. They had advanced on by winning their first game on Thursday over White Shield. In that game, Shay Brunelle had the hot hand by scorching the nets for 27 points. The Eagles were focused in the game against Lewis and Clark -North Shore Plaza that sent them to region. They were led by Zoe Fox with 17 points and Shay Brunelle knocked down 15 points for the Eagles. Mya Johnson hit for 8 points for New Town. 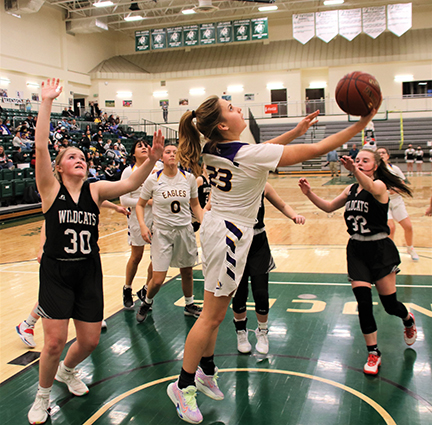 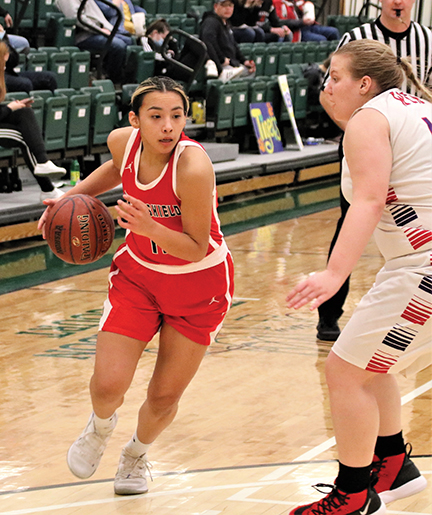 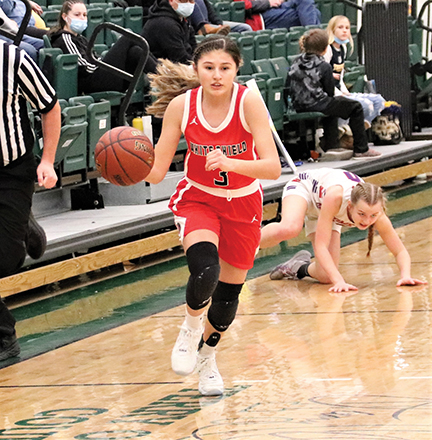 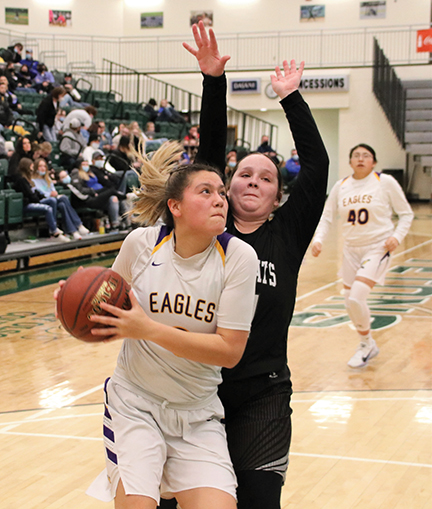 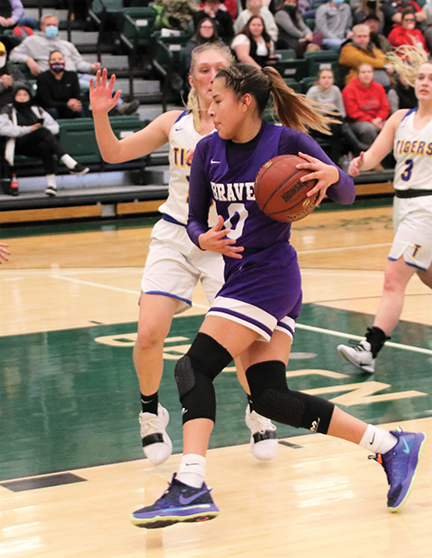 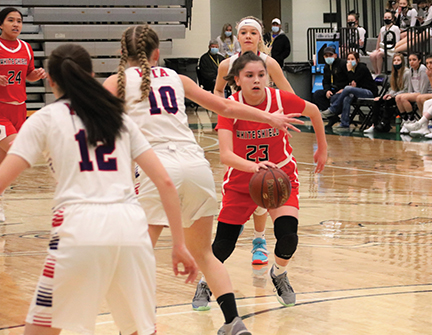 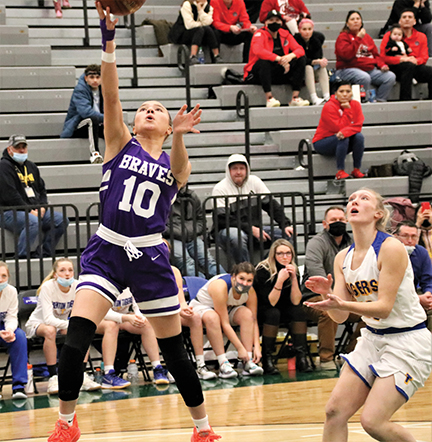 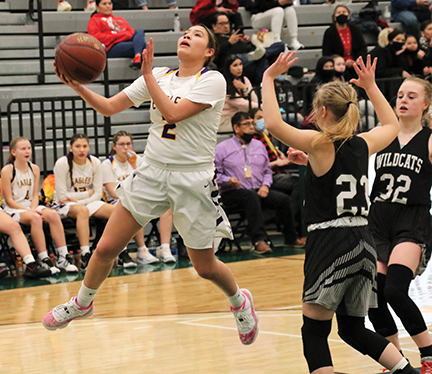 Wendi Wells coaches the Eagles with her father, Charles Wells. She was pleased with the improvement in the New Town team that only was cleared for practice on January 15th. They had not won a regular season contest out of five games until winning two head-turning wins last weekend at districts in Williston.

“We felt we had a good practice on things we needed to improve in the week going into districts and it helped a lot” she said. “We’re happy to be going to regionals being we went into district with an 0-5 record. That says we have been improving and hopefully we will be prepared for a very solid Kenmare team (on Monday).”

After the loss to New Town on Thursday by the score of 53-39, White Shield came back to provide all the fans on Saturday with probably the most exciting game of the tournament. However, they lost a heartbreaker to the Trinity Christian/Alexander Comet/Crusaders in the other region qualifier by the score of 47-45. The Lady Warriors fell behind by double digits early in the fourth quarter and their top scorer Lexus Fox fouled out. As the final minutes wound down, two more starters fouled out for White Shield. However, the ones who came off the bench and fought back mounting a great comeback with clutch shots, especially Eathosh Fox who hit two late treys in the comeback before fouling out with over a minute to go and Promise Andrade, a freshman who hit a long bomb to give the Lady Warriors a four-point lead. The Comet/Crusaders took advantage of a turnover in the last minute with the score tied at 45 and Samantha Turnquist went to the line to hit two free throws to take the two point lead. Coming down to the left wing with the ball for White Shield with the last few seconds, Hailey Bearstail came down the court with six seconds left in the game. The Lady Warrior senior was about to shoot when a defender collided with her, knocking Bearstail to the floor as the ball skipped away. No foul was called, and the disappointed White Shield players were left on the court expecting a whistle that never came.  Head coach Shaunna Knife is in her first year at the helm of the Lady Warriors and she knows how hard her team worked in that game to try and qualify for the region tournament.

“I think the effort was there for us and the game showed a lot of how we can step up. Freshman Promise (Aldrade) was able to get in some action at tournament time and she played some good defense for us,” Knife noted. “The outcome was not what we wanted and I feel bad for our seniors who played their last game for us and that is the crushing part of it. Our seniors really bought into what we were doing as a team. I think the game against (Williston Trinity/Alexander) came down to free throws and a little bit of mental fatigue. We had three of our starters fouled out and the other team took advantage of that.”