The Highlights and Milestones of Jesse White

Jesse White is a human highlight on the basketball court. Over his years of playing basketball, he has amazed every fan and made his family and MHA Nation proud. As a senior on the White Shield Warrior basketball team, he is at the pinnacle of his high school career and achieved much in the way of major accomplishments. He has certainly brought recognition to the MHA Nation in his dazzling style of play and now vaulting to third place all-time in career scoring in North Dakota basketball history. 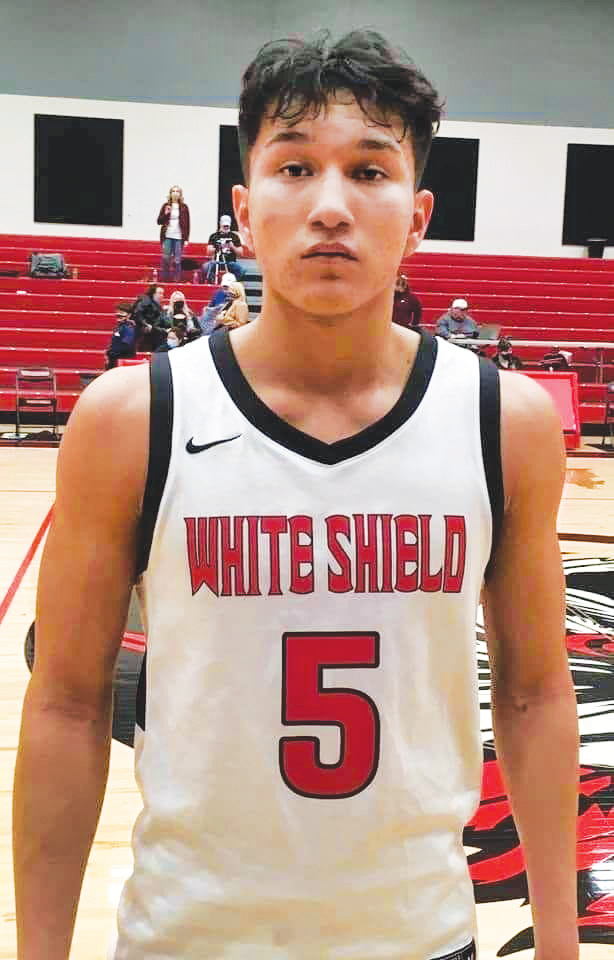 Jesse White after the game he reached 2,500 points last week in  White Shield

Driven to excel through the guidance and encouragement of his family members and coaches since he was in second grade, White can look back on his outstanding career with pride. Despite his many accomplishments, he remains humble and only thinks about his team winning and his goal is to go to the State B Tournament with his coach and teammates. Right now, he is looking forward to the goals he has worked so hard for to help his team out in their goals. He just passed the career mark of 2,500 points in a game last week against the Dunseith Dragons. White is now in third place behind Steve Blehm who played for the North Dakota School for the Deaf in the mid-1960s and Ron Wagner of New Town. White has 2,541 points and is on track to surpass the heralded Wagner, a local basketball legend who scored 2,714 points. White has become quite a legend himself already across the state with his uncanny ability on the court. White is averaging over 28 points a game this season and is a leaper who can dunk the ball easily. He plays the point guard position as well, creating open shots for his teammates throughout the game. Opposing coaches all plan their strategies to try to stop White and defenses double and triple team White every game. The White Shield senior already has offers to play college ball across the state, but that is not on his mind at all. The young phenom is only pursuing one goal and that is to get his team to the state tournament.

“I am focusing on this season, my team and the six regular season games we have left to be ready for the tournament – and we will be ready for the district tournament when it comes to that time,” said White. “I worked hard and always have my mom and dad and my little sister on my mind. I want my little sister (Promise Andrade) to have someone to look up to who can achieve their goals and I want her to achieve her goals.”

White does not focus on himself as far as personal accolades, but he said that if he was nominated and/or named North Dakota Mr. Basketball for this year, it would be an honor. He certainly can do it all on the basketball court and anyone who has seen him play even one game would agree with that assessment. Perhaps the Mr. 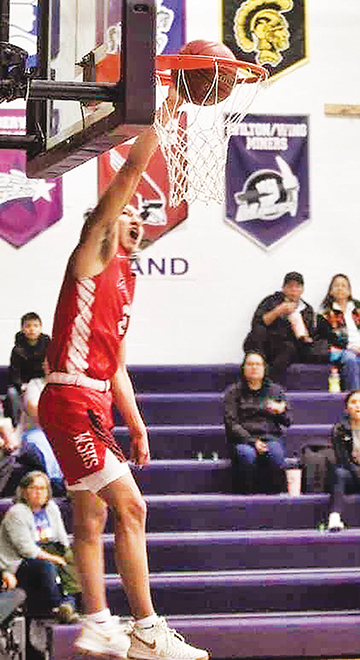 Jesse White slams it home for the White Shield Warriors

Basketball committee should look at game film to see what kind of player White is, if they have never seen him in action. Whatever comes next for White, it is well-deserved because he has learned to play ball despite a left hand that has four fingers not fully formed. No one would realize that physical challenge White has endured and overcome since second grade when they see him play.

The parents of Jesse White are Sonny White of White Shield and Roseanne Andrade of California. He has a very loyal and proud family circle that follows him to every game and the Jesse White fan club section is always an excited group. That excitement is shared by every fan, home or opposing team fan whenever the White Shield standout has the ball. No one is prepared for the next move he has in store for his defensive opponents in most instances.