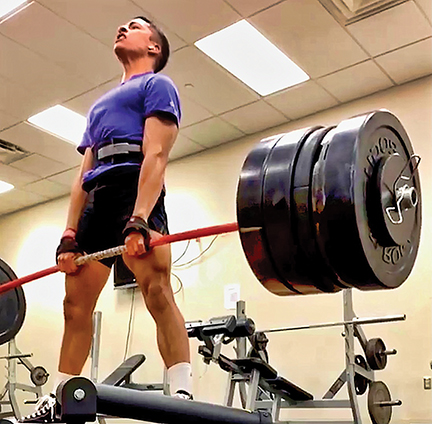 Endless hours of training has gone into the success Francis Short Bull is achieving.

The competitive United States Powerlifting Association event in Fargo last Saturday was aptly named ‘The Battle For The North’. The USPA hosted the competition that featured some of the best powerlifters in the region. One focused competitor who stood by in anticipation of his events had one goal on his mind. That goal was to win a medal for his grandmother who was rooting for her grandson back home on the MHA Nation.

Francis Short Bull did win that medal from the USPA and it was for placing first in all three events and setting two USPA records in his weight division of 148 pounds. Short Bull did squats, bench press and deadlift at the USPA competition and placed first in all three of those events. As soon as he got home from Fargo, the 19-year-old MHA Nation tribal member stopped in to show his mother his medal and then went directly to his grandmother’s home and presented her with that hard-earned medal. Sharlene Baker is now proudly keeping her grandson’s USPA medal in a special place in her house and in her heart. Short Bull wanted to compete in powerlifting last year and win a medal for his grandmother, but because of COVID, he had to wait until this year. Now the honor of winning a USPA medal and his achievements are cherished by his entire family.

“I did everything that I wanted to do in Fargo,” stated Short Bull. Even though I was recovering from a wrist injury, but that didn’t bother me at the meet. I couldn’t train for a month with my upper body and that hurt a bit on my bench. But in June, I want to compete in Williston and beat the USPA bench record. I’m not trying to sound overconfident or cocky, but I know I can do it,” said Short Bull. 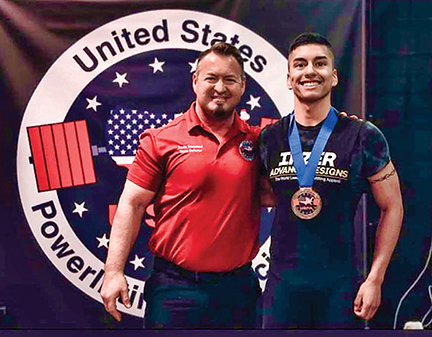 In Fargo, Short Bull broke two USPA records in the 148-pound division. He set a USPA record in the squat at 347 pounds which is more than twice his weight and his other record occurred when he deadlifted 490 pounds, which is over three times his own weight. For his first-ever powerlifting competition, Short Bull did a remarkable job and is eager to compete again.

“Watching his determination over the years, he has learned self-discipline and has used his mental strength to push his physical limits,” said his mother, Dr. Ruth Plenty Sweetgrass-She Kills. “He’s learned about proper form when lifting as well as the best diet to help him reach his goals. I believe the discipline he has learned in the gym has contributed to his ability to push through many challenges like his current course load (22 credits at NHSC). I’m so proud of my son who gave his medal to his paternal grandmother who has always helped since she is on dialysis.”

Short Bull says his mother’s basement is his main gym for training and he appreciates that private space she gives him. He feels that he is his own best motivator for training because of the passion he has for lifting. His future lofty goals are to set as many records as he can that will stand for a long time in USPA history.

“What started me lifting was my insecurity of how I looked when I was so skinny and now I feel happy with my appearance but want to do more and be better. It’s about health and having confidence in life,” Short Bull noted.

Short Bull says he also grateful to his father, Michael Short Bull, for purchasing a lot of his training equipment because as a college student, it would be hard financially for him if his father didn’t help him out.

Short Bull also active in boxing in the past and participated in track and field on the New Town team in 2019 when the Eagles took second at the state meet. Short Bull ran on a relay team that year and placed fourth.

Now Short Bull will focus on his main passion for the foreseeable future which is powerlifting and hopes to compete several years. Francis Short Bull is enrolled member of the MHA Nation.