College ball is always tough to play and the Storm of Nueta Hidatsa Sahnish College met the foes from the east although they were vastly outnumbered. The Storm opened up their season by hosting a double header against the Sisseton Wahpeton College last weekend. The fans who attended the games were treated with some great action both Friday night and Saturday afternoon.

In the first contest, Jessie Chase poured in 24 points to keep the game tight but the Storm players suited up only seven players but in the end, fatigue from a run and gun game set in for the Storm that allowed the Mustangs of SWC eke out an 85-76 win over the Storm. Ashton Grady had a great all-around game hitting for 17 points for the Storm. Also in double figures on Friday night were Jordan Manning with 14 points and Shooter Stewart with a dozen points. 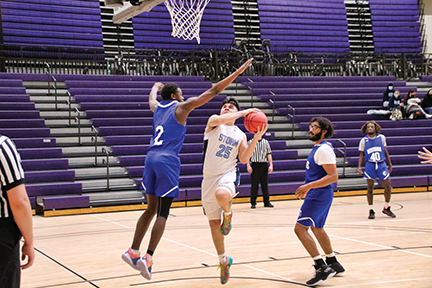 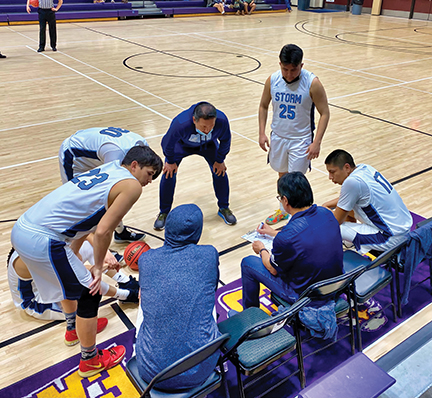 Team strategizes during a time out. 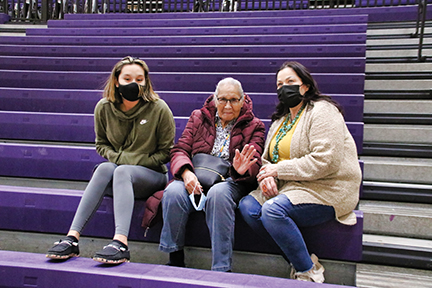 The following day, the Storm was down to only six players and the NHSC men held their own in the first half, but the Mustangs pushed the ball up and down the court to once again utilize their much larger bench and slowly pull away from the Storm with an 89-65 win. For the Storm, Jordan Manning pulled down a lot of rebounds on Saturday and Manning also was the leading scorer for NHSC with 18 points. Chase was also a great contributor to the Storm’s offensive effort on Saturday with 17 points and showing why he was one of the top players in the state last year as a senior for Mandaree. Helping out with a dozen points in the Saturday game was Michael Mann and also in double figures was Ashton Grady with 10 tallies on the day. NHSC Storm Head Coach Daryl Bearstail appreciates the team and how they stepped up their intensity in the first of the two games, but the players were worn out a bit on Saturday and the energy level was not up to what was needed to play a quick and deep team such as Sisseton Wahpeton.

“We have a lot of things to work on and it’s a little tough to progress at a faster rate because we don’t have the numbers in practice. We are behind where we should be. Defense is a big thing. We need to stop dribble penetration and we have a couple guys who joined up late and need to learn our system,” said Coach Bearstail. “We will do the best we can with six players and I feel on Friday we did very well but we were pretty tired on Saturday. No excuses, but I thought we kind of hung our heads on that second day and we lost some of the intensity we had on Friday. We have to stay mentally tough and stay with it for 40 minutes.”

Bearstail noted that on Friday, the Mustangs hit 17 three-pointers and on Saturday, their opponents hit 10 treys. He was happy to see some nice glimpses of how good the Storm can be as the season progresses. The Storm has 17 games and they will travel to Sisseton Wahpeton for a chance to avenge the losses on the road.

The NHSC Storm was on the road last week and played a double header against Trinity Bible College in Ellendale last Friday and Saturday. On Monday, NHSC played Jamestown College. No results or game stats were available at press time.