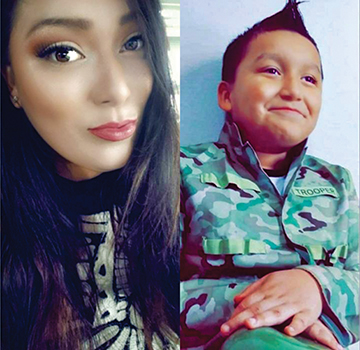 DeMay Lavette Bear was born on November 25, 1992 in Minot, to Chad Bear, Sr. and Geraldine Dubray. Her parents called her a miracle baby because she was born premature and needed to be revived at birth. DeMay had a fast recovery and began to grow strong and fast and was soon able to go home with her family in New Town.

She was raised and educated in New Town until just before her teen years. She then enrolled into Circle of Nations, in Wahpeton, where she started to become a woman who was independent, strong willed, and brave. Her brothers also attended school with her and were there to guide her at school and what to expect in life. They were her motivators to do well in everything in life.

Her family provided her the tough love she needed to keep on a good path; she knew the hard truth no matter what. After completing school in Wahpeton, she returned to New Town with her grandma, Mona Bear and father, Chad Bear Sr.

At the age of 17, still a young woman, she decided to travel. On November 18, 2011, DeMay gave birth to Quoden Everette Lee Bear in Bernalillo, New Mexico.  He was her first true love. She met Star Big Back and was blessed with two children. Quintin Light Big Back was born October 19, 2012 and Kadira Kay Big Back was born on December 8, 2015. They made a home in Denver, Colorado for a few years before returning to New Town. DeMay loved all her children dearly, all were her pride and Joy.

In March of 2017, DeMay met the love of her life, Miles Emerson Fox. On October 5, 2017, DeMay and Miles were united in marriage in Minot. They began their life together and he fell in love with Quoden and Kadira and proudly took the roll as father figure to them. They moved to Bismarck in November of 2017. DeMay had wanted to move for a long time and it was a good decision. It brought her closer to her mother. DeMay would call for advice or help and her mother would do anything she possibly could do to make sure everything would be ok.

DeMay was employed at Walmart and Buffalo Wild Wings. She was interested in health and beauty. She was a representative for LimeLife by Alcone which was a job she loved. Putting on makeup and making videos was fun for her. Other interests included art and writing poetry; she loved to sing. Photography was also a passion. Many of her photos were her children and Miles; she would have them pose while out for walks and going to the parks. They all enjoyed the outdoors and their many fishing trips together.

Miles got the opportunity for a better job in New Town.  They decided to move closer and they made their home in Parshall in December of 2020.

DeMay will always be remembered for her beautiful smile, her kindness and compassion for others, and the love for her children.

DeMay Lavette (Bear) Fox, passed from this life with her oldest son, Quoden Everette Lee Bear, on January 18, 2021. Hand in hand they will make their journey together.

Quoden Everette Lee Bear was born on November 18, 2011 in Bernalillo, New Mexico to Steve Lockwood and DeMay Bear.  He travelled with his mother and was always by her side. He witnessed pow wows in Albuquerque, New Mexico and the mountains in Denver, Colorado. He learned a lot through his travels and was becoming a smart young man.

Quoden had “old man” wisdom in his early age and already had street smarts. After several years of traveling, they settled in his mother’s hometown of New Town, ND.  Quoden started school at the Edwin Loe Elementary. They moved to Bismarck, in 2017, and he attended Northridge Elementary. In December 2020, the family moved to Parshall, where he was excited to become a Parshall Brave.

Quoden was interested in video games such as Mindcraft and retro arcade games. He liked to use his imagination and make forts both in and out of the house.

Quoden was also a very loving son. He responded to love rather than an authority. When you showed him love, he would listen and be caring. He would want to understand why things were the way they are. He loved to cuddle and give hugs. If you cared, he cared.

Quoden’s life was short with us on this Earth. He passed away with his mother, DeMay Fox, in a tragic car accident on January 18, 2021, near Parshall. Before Quoden left this world, he left a lasting imprint on those who he met throughout the many places he travelled and lived.

Prayer Service: Monday at 11 a.m. at the funeral home