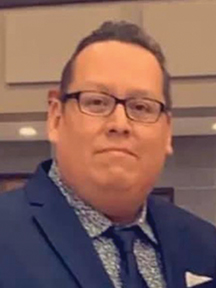 Christopher Jay Rabbithead was born December 31, 1976 in Minot, ND to Karen Rabbithead and James Walker. Chris was an enrolled member of the Mandan, Hidatsa, and Arikara Nation.  He was baptized into the Catholic faith at Parshall St. Bridget Catholic Church.

He was raised in Parshall and attended Little Feather Head Start, Parshall Elementary School, and graduated from Parshall High School with the class of 1995. While attending high school he participated in basketball, football, and track. In basketball he was often known for his no-look passes and his clutch 3’s. In 1994 and 1995 Chris was a part of the Parshall 3200m relay team who participated at state. After high school Chris attended the University of Mary and studied in Education.

Chris was a very committed and dedicated hard worker, on September 19, 2005 he started his 15-year long career with the Four Bears Casino and Lodge as a Management Information System Technician.

Chris’s love for sports made him an avid sports fanatic; you would see him travel, support, and post about his college football and basketball team, the University of Michigan…. GO BLUE! His NFL team New York Giants, NBA team Los Angeles Lakers, MLB team Atlanta Braves, NHL team Minnesota Wild. Tiger Woods was his favorite golfer.  His true passion was the sport of golf.  He enjoyed every aspect of the game. With his competitive drive, he competed in many tournaments across the Midwest with many of his golfing buddies.

Chris then introduced his love and passion for the game to his “Neph” his Dynamic Duo, Deyondre, this is where you could hear him talk about their adventure’s and tournaments that they competed in together.

Chris will be greatly missed for his sense of humor, kind heart, and his crazy social media posts.