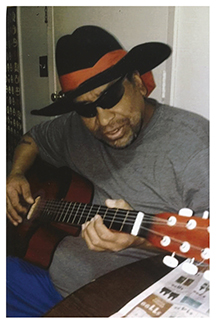 Glenn Cornelius LittleBird, Jr. was born October 27, 1969 at Crow Agency, Montana, to Verona “Dolly” Gwin and Glenn LittleBird, Sr.  He was a member of the Hidatsa Prairie Chicken Clan on his mother’s side and was part of the Elk Horn Scraper Warrior Society in Cheyenne through his father. His traditional names were “Strikes Enemy” in Arikara and “High Eagle” in Cheyenne.

As a child, the family travelled and lived in many communities where his dad worked for the BIA.  He graduated from Poplar High School in 1990.  Glenn participated in many activities including wrestling and boxing, where he was the Golden Gloves champion in 1982.  In 1988, he received training and worked as a Wildland Firefighter in Yellowstone for several summers.

After graduation, Glenn continued his education in Chicago receiving his certification as an ironworker.  With his adventurous spirit, he then joined the carnival and travelled with them for three years.  He was proud of being a “carny”.  He had many jobs throughout his life, but he found his calling as a chef.  He worked as a short-order cook starting in Chicago and continuing at several local restaurants in New Town.

In 2008, he moved back to North Dakota to raise his three sons.  He was the most solid man and a great role model to his boys.  He taught them to stand in this world.  He was intelligent and readily shared his life’s lessons.  He had a good heart and took care of his family and friends.  He made a positive impression on many and would give all he had to make sure others didn’t go without.

Glenn was also creative.  He loved to write music.  He played harmonica and guitar and sang with a local band. He touched many lives and will be missed by his family and friends.  To honor his memory, be kind and supportive to others.

He was preceded in death by his brothers, Good Bear, LittleBird; grandparents, Annie and Harry LittleBird, Serena and Joseph Gardner; great-grandparents, John and Lillian Bad Brave, and Ernest King; his companion, Carmen Fighting Bear; and many cousins.