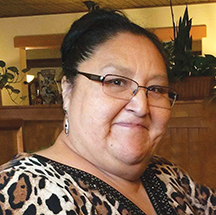 Deborah “Deb” Kay Hinojosa was born September 16, 1957, the sixth child born to Leroy and Juliette (Starr) Lockwood. Deb graduated from Flandreau Indian School in 1975.  Shortly after, she moved to California where she met Carlos Hinojosa.  It wasn’t long after and she was married with two daughters.

Deb continued her education in 1991 for Medical Transcription at Cerritos Community College in Norwalk, CA.  Deb also worked at Makita Power Drills in La Mirada, CA; she enjoyed her job and co-workers.

In 2005, Deb moved home to North Dakota to take care of her mom.  She also raised her three grandchildren during this time: Miranda, Fraser, and Larissa.  In 2007, she started teaching at Head Start and continued her education in Early Childhood Development through the community college. She was a stay-at-home grandma to Farron and several years later, Dawn (her chubby), came along.

Deb was thee #1 LA Dodgers fan!  She loved them and made sure everyone knew she was their biggest fan. Her daughter, Amy, (Deb’s mini-me), told her all the time she was worse than a teenager because she was always on Facebook.  Deb had a most serious face which made you think…I better not mess with her.  Then, once you knew her, you would learn she had the biggest heart ever.

Her love for her family and friends was endless.  She loved to be silly with her sisters.  More than anything, she loved her grandchildren; they never did wrong in her eyes.  Deb was anxiously waiting for her first great-grandchild, a boy, to be born in a few weeks.

On Sunday, January 17, 2021, Deborah Hinojosa passed away at a Minot hospital. Her kind spirit and loving heart touched many and will be greatly missed.

The family honored her life with a gathering of friends and family on Thursday, January 21, 2021 and held a prayer service with final reviewal on Friday, January 22, 2021 at Langhans Funeral Home, Parshall