The running career of Addison Red Fox is now at the collegiate level and the MHA Nation tribal member is still very dedicated to the sport he loves. As a current college athlete, Red Fox is even more dedicated to his training because the competition is as tough – or even tougher than it was when he was a state champion in his last two years of high school with the New Town Eagles.

Red Fox attends Black Hills State University in Spearfish, South Dakota. The college freshman runner signed up to attend the college and he received an athletic scholarship from the university to run for both the cross country team and track teams. The picturesque college campus is nestled in the Black Hills and Red Fox loves running and training on the trails that are all over the area. Last week while he was on a brief spring break here on the Fort Berthold Reservation, Red Fox stated that he is more than pleased with his choice of colleges to learn a career and be part of a great team of runners. At Black Hills State, he pours a lot of energy into his training as he works hard consistently on improving as a distance runner.

As a New Town Eagle, Red Fox was a proud member of a team that was built on a true legacy and his teammates and coach Bruce Anderson inspired him on a daily basis.

“The best race in high school for me was in Velva when I had a time of 16:45 in that 5k race,” said Red Fox. “It was sunny that day and that was my PR (personal best) and I came in second to my teammate, Robert White Jr, who beat me in that race. Robert was the cross country state champion that year.” 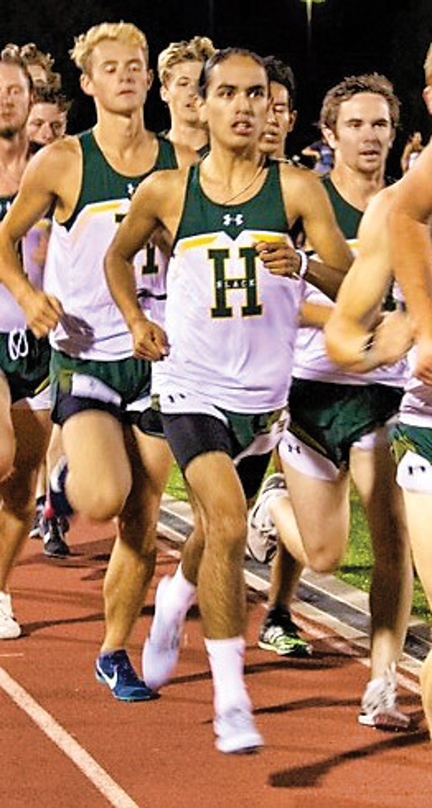 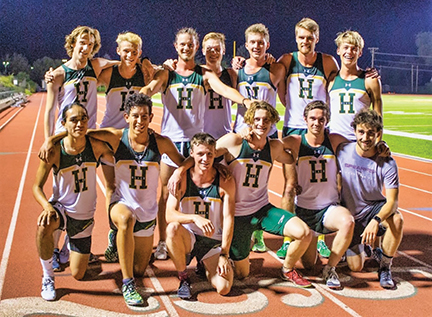 Red Fox also was a team member of the 4X800 relay team state champion for the New Town Eagles in his senior year. He was a state champion for the Eagles and also senior athlete of the year in North Dakota. Along with a generous athletic scholarship from Black Hills State, Red Fox is proud to be the only Native American on the team. Red Fox emphasized that he is totally accepted as an equal by his coach and teammates and feels good about being on the Yellow Jackets cross country and track teams. He has established a great connection with the team and campus community after developing many friendships on the Black Hills State teams and student body. When Red Fox ran last year in Colorado Springs, Colorado at the RMAC Cross Country Championships, he ran a robust 29:10 in 8k (5 miles) and feels confident as he begins the RMAC track season.

“The Rocky Mountain Athletic Conference (RMAC) consists of teams from South Dakota, Colorado, New Mexico, Nebraska and Utah and it’s one of the toughest conferences in the nation. Trails in the Black Hills location are great. The academics are tougher as well, especially in these trying times, but the college and instructors are able to make accommodations for the students. My major exercise science which allows me to take courses in chiropractic medicine, sports medicine, and occupational therapy,” Red Fox said. The Yellow Jackets freshman was one of the top 9 runners chosen to represent Black Hills State at the RMAC on the men’s team and it was quite an honor for the young freshman.

“I was a little nervous because the fact it is like a state meet and we were all congested at the starting line,” said Red Fox. “Making that traveling team from each of the men and women was great. We run 8 kilometers in college with is almost 5 miles compared to high school cross country which is miles 3.1. It’s a tough transition so I have to change my strategy for the race and the way I run now had to be switched up. My goals are to get in as many meets as I can under my belt. I plan on running the 5k and 10k for the Yellow Jackets track team and I have a good coach in Seth Mishke.”

His cross country coach in his freshman year in college was Scott Foley.

“It’s his first year, but I trust in him because he knows what he’s doing,” stated Red Fox.

Red Fox added that his long term goal in college track is to make it the national meet indoor and outdoor track and he devotes a lot of time training to improve his times. He trains regularly with a run on weekdays of 6 to 8 miles and on Saturdays, he goes between 12 to 15 miles for a hard run.

“My mom is my biggest inspiration and she is always giving me encouragement and advice in everything I do in life,” said Red Fox.

Red Fox’s parents are Red Fox and Herbert “Anton” Sanchez and he spent his elementary school years in Porcupine SD and Kyle, SD. The family moved back to New Town for his freshman year and he took to the high school running program at New Town with a passion and is now part of the amazing running legacy of the MHA Nation now. His mother is proud of her son and the way he has persevered in sports and in learning more about his native culture. The path he is on is one that will bring him good things in life, noted his mother, Red Fox Sanchez.

“Ever since he was young, he was a smaller kid and he battled the odds and bullies, but he continued to stay positive and even though he was picked on but he never stopped working hard. It actually surprised me when he wanted to join the cross country team in Porcupine as a fourth grader,” said Sanchez. “I remember the first elementary meet he competed in, he came in second to last but he never gave up. Then when he was a seventh grader he ran at the high school level at Red Cloud High School after the coach allowed him on the track team. He ran both the two mile and the mile and ran against the big boys. But he just never gave up. Running is when he is in his element and he is bound and determined to do his best. He just wants to help people be healthy and he has kept his culture and wants to learn more about his native ancestry and language. He has always liked the Black Hills and has had a connection to the college in Spearfish. We put him in a camp at Black Hills State campus when he was in seventh grade and the last day they had a race and he finished it and didn’t come close to placing, coming in second to last. But the summer of his senior year, we got him at the very same camp with the same coach, Scott Walking Shaw. Addison ended up running in that final race among all the participants and he came in first.”

That accomplishment shared by a proud mother shows how sheer will and dedication can produce phenomenal results in any sport or any dream in life.