COVID testing remains a high priority for tribal leaders and the health care providers on the MHA Nation and surrounding community.  The importance of continued testing and monitoring of the COVID-19 virus will be critical for stopping the spread of the ongoing pandemic, even as the vaccination program begins the early stages in both tribal and state communities.

On Tuesday, January 12th, there were many residents of the Parshall/Lucky Mound community and Northeast Segment who did their testing at the Boys 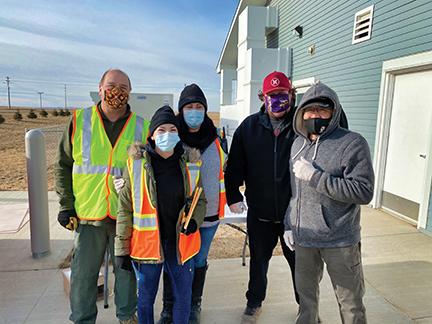 and Girls Club.  The operation went smoothly with local community nurses performing the tests. The two local nurses were busy with the swabbing of each individual. They were assisted by several members of the North Dakota National Guard with those military personnel doing intake and record keeping of each individual test.

Brianna Foote is a Parshall native and nurse who volunteered all afternoon at the testing site. Foote is the North Segment Home Services Nurse and she reported that a total of 123 tests were completed in Parshall. She is happy to be a part of the testing process along with her fellow nurse and volunteer, Sunny Hall who also administered COVID-19 tests at the Parshall Boys and Girls Club that day.  All of the individuals received their results within a span of two days where they were contacted via text message or email.

Foote said the team along with the National Guard members were gearing up for that Thursday in White Shield on Thursday. She added that anyone from each of the MHA Nation segments can be tested during any testing event.

“All of the testing is actually open to all segments when we come out to the segments on MHA,” said Foote.

MHA COVID Task Force members were at the exit of the testing site in Parshall that day and the task force gave out 280 bottles of hand sanitizer. All of the 500 masks they came with were given out and they actually ran out of masks since there were five masks to each packet with the first 100 participants getting the packets of masks.

COVID Task Force Distribution Manager Aprielle Poitra coordinates all distribution activities for all four segments on MHA Nation. The Parshall event was just one of many that the task force participates in and gives out essential items to the communities.

“I hear the Parshall testing event really went well and if anyone needs to reach out and we will be there – especially for testing. I enjoy going out to the testing events because I enjoy giving out necessities,” said Poitra. 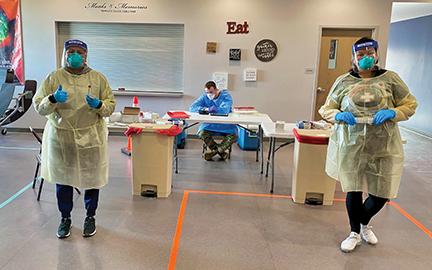