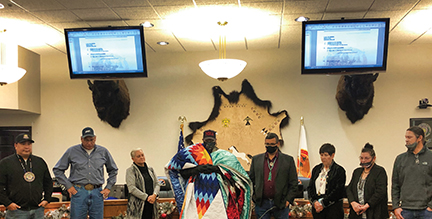 The career of Pete Coffey Jr. has been a rewarding one that can be appreciated by all MHA Nation tribal members and native people. Coffey’s dedication to every part of the variety of jobs and volunteer work he has performed over the years comes from his personal and professional integrity and the love for his culture and ancestors.

Last week, Coffey was honored at the Tribal Business Council meeting by the Tribal Chairman Mark Fox and all tribal council members for his many contributions to the tribe. In the years he put in as a tribal employee, he was a voice 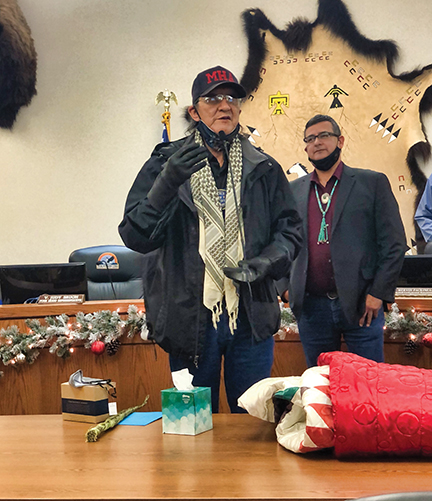 Pete Coffee speaks at the Honoring

for the people at KMHA-FM radio, the local tribal radio station and the MHA Times. One can quickly understand how Coffey fit into the radio station with his powerful voice and zest for his culture and language. The special honoring was also for his other important work that has involved the intense and almost sacred duty he so willingly performed as the tribal historic preservation officer for MHA Nation. In the course of that job, he has conducted and overseen many repatriation projects for the Mandan, Hidatsa and Arikara tribes that make up the MHA Nation. However, Coffee felt it was time to step back for a while and enjoy life at home. Since the pandemic, he and his wife have been what he calls “virtual hermits” because they are a part of the most vulnerable segment of the population to the COVID-19 virus. But he is happy he was able to be present at the honoring last Thursday.

“I was outside the tribal offices in my truck listening to the meeting on my radio when it was announced surprisingly to me that I was to be called into the meeting. I was told to show up but I wasn’t aware if I was on the agenda or not. I was taken aback at the honoring but I am very grateful and happy for the TBC leaders to do all what they did for me. I was expecting a handshake and maybe a blanket, but it was so much more.  They did an honoring song and I was gifted with star quilts. It was much more than I expected,” said Coffey.

Coffey is a respected professional and has made his mark in radio and in the preservation of the MHA traditional cultures. Well known across the nation, Coffee believes all of his work was destiny. When he was an infant, Coffee was given the position of ‘announcer’ for the Elbowoods Antelope Society by his uncle who was a member of that society.

“Since I was an infant and child, in my stead, my dad did the announcer obligation for me by being the announcer at all the pow wows and other events. Then when I kind of stumbled into radio broadcasting, that ended up being a career that really helped me fulfill my clan obligation as the announcer for the society. Now since I retired, I plan on fixing some fences and after taking it easy for a while, maybe I will go back to work in some capacity to help out our tribal members in some way,” said Coffee.

Coffey noted that he is not completely “out of the mix” of community service since he will remain on the White Shield Housing Board and the MHA Nation Interpretive Center Board of Directors.

Delvin Driver Jr. is the chairman of the Fort Berthold Communications Board of Directors, a position he inherited from Coffey. Driver has known Coffey since Driver was a youngster and he also remembers Coffey’s father, Pete Coffee Sr. who he also admired as a speaker and announcer.

“Pete Sr. was a robust traditional speaker and Pete Jr. was part of the birth and launching of the media era here on the reservation from the very beginnings of our radio station and newspaper,” Driver related. “Pete (Jr.) is still thought of and known to be the voice of KMHA over the years and it makes sense because his dad was such a prominent pow wow and rodeo emcee even before Pete started his career in radio. Father and son shared the similar role of being a voice of the people. I remember seeing him at all the pow wows recording the singers and drummers for the radio station when he was at the radio station. Growing up, I remember those voices. Both father and son were blessed with strong voices and their voices always had a presence to them. Their voices stood out whenever you were at the pow wows.”

Coffey has put his heart and soul into everything he has done over his long and illustrious career. One of the original members of the KMHA staff and radio personalities, Coffey still has that deep baritone voice and keen intelligence to remain a great communicator for the tribal nations of the world. Dorreen Yellowbird remembers well of how deep the commitment Coffey had when she worked with him at the radio station several years ago. Yellowbird is a staunch admirer of the complete devotion Coffey has demonstrated to the community of MHA Nation.

Yellowbird recalls the times that Coffey would climb the radio station tower to place an eagle feather at the top. She also recalls the tremendous dedication he has for not only the communications and media for the MHA Nation, but also his devotion to the tribal historic preservation office and its very challenging duties and responsibilities.

Yellowbird noted one day that there were some ancestral remains that had to be buried and the temperature was that of suffocating heat outside.

“I went out to the site which was a buffalo pasture to see how he was doing and here he was all by himself, jumping in the hole in ground and doing the ceremonies required to place those remains. It was so hot that day and he was sweating so much, but he just kept going back in that hole to finish the ceremony,” Yellowbird stated. “When he was at the radio station, he did everything and knew how to operate all of the equipment and he also helped out with the newspaper as well. He just was willing to do whatever it took to do a good job at anything.”

Coffey has many accomplishments over the years and he looks back at his years of working for the tribe with pride and a sense of satisfaction. He was a fixture at KMHA for 12 steady and busy years from 1984 through 1996. He also worked for a time in Fort Belknap, Montana at KGBA and on the Spirit Lake Sioux Reservation at KABU. At KABU, Coffey and a colleague, Alex Looking Elk, built the studios of KABU and trained the staff at the radio station there. He then moved back and began his job in the tribal historic preservation office.

Relaxing at his home on Sunday, Coffey reflected back on his career and shared several stories about the fun he had in radio and the sense of purpose that still guides him today. It seems retirement is not going to change the nature of a hard-working tribal member who still sees himself as a contributor to the betterment of the MHA Nation.