A Champion of Education and Culture 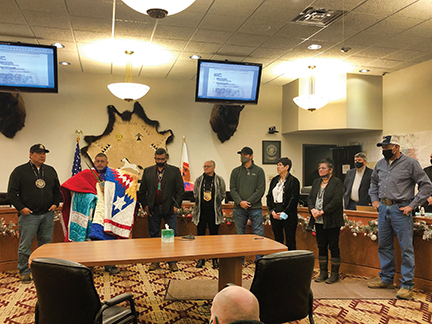 A quality education is vital to the success for every person in the world and knowledge is what brings advancement and fulfillment in life. That fact has never been disputed by very many people and that philosophy always been front and center as Marc Bluestone began every day during the course of his long career in education. The longtime educator and superintendent for New Town School District officially retired last week.

In recognition for his work and commitment to students at New Town School District, Bluestone was given praise and a special honoring from Tribal Chairman Mark Fox and the TAT Tribal Council at the Tribal Business Council (TBC) meeting last Thursday that showcased their gratitude and respect for 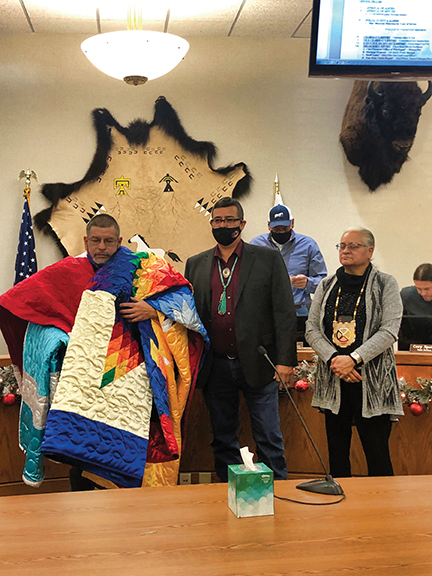 Marc Bluestone in the Council chambers

the MHA Nation tribal member who devoted nearly 31 years working in the New Town School District. After his honoring at tribal headquarters last week, Bluestone’s voice had some emotional tones to it. The MHA tribal member had some mixed emotions but he is glad to have made it to this point in life.

“To be honest, I was overwhelmed by the honoring by the tribal chairman and council,” Bluestone stated. “They all gave me a tribute and there was even an honor song for me that felt so surreal. I was impressed by the time and effort they put out for me. The tribal leaders all spoke and shared their thoughts and they honored me putting their meeting on hold for a while and to me, that put a smile on my face knowing that the leadership of the tribe feels I made a positive difference in the kids, school and the tribe. I have a good relationship with the tribal leaders and they have always been supportive to me and the students at New Town schools. This (MHA Nation) is my home and the honoring was a nice way of going out.” Bluestone’s last official day as New Town School Superintendent was last Thursday.

It has been a great and challenging journey for Bluestone, he emphasized. Bluestone graduated from the Belcourt High School on the Turtle Mountain Chippewa Reservation where his mother, Dixie Bluestone worked for many years as a physician’s assistant for the Indian Health Service. After graduating from college with his education degree, he spent two years working as the Indian Education Coordinator for the Grand Forks school system. After that tenure in Grand Forks, Bluestone came to work for his own tribe on MHA Nation and has never left since. He worked every day with that thought in mind and realistic goals that he has achieved while he was at New Town School District. Delvin Driver is the school board president and he sees the retirement of Bluestone as a reminder to impress upon himself and others as to how an educator can be a leader to a brighter path for students.

“His knowledge in the capacity of his work was unsurpassed and very outstanding,” stated Driver. “Coming in as a board member, you go to trainings to be an effective board member. As you serve in that capacity, you see how much Marc brought to the table. His lobbying for funding for the school and all the way to bringing the school’s Eagle Feather Club to the elderly in nursing homes around the area was his way of showing our culture and giving the kids a chance to learn and live their own native culture. In Williston there are no pow wows anymore, but he brought those kids there and the elders were able to see the dances and hear the songs. He is educating people everywhere about the culture. He takes the time and does things like visiting kids one-on-one to help them graduate. He is non-stop worker and that work ethic brought us angles of knowledge on a topic or issue and it helped us come to a proper conclusion as a school board. He was non-stop and maybe that comes from his military background as a veteran. In November on Veterans Day, he always raised the flag and honors the veterans with a traditional flag song over the loudspeakers in the school. It will be difficult to not see him any longer in that capacity. He made my job easy and I think I speak for the rest of the school board that he was a great communicator.”

According to incoming school superintendent Beth Zeitz, Marc Bluestone is a champion of education. “His integration of Native American culture in the New Town Schools is evident everywhere one looks. Teachers are well versed in the history of the Three Affiliated Tribes due to his commitment to professional development. He has been an excellent mentor and I hope to build on his legacy continuing to improve graduation rates and encouraging students to reach their full potential,” stated Zeitz.

Bluestone said he could have never achieved any of his goals without the stability of the school boards he had the opportunity to work with, the parents support, the tribal leaders support, but most of all, he credits his spouse Carolyn Bluestone for being able to stay focused every day. His wife is also an educator.

“I believe it was important that we each had a sounding board every day to help us with the daily challenges of our work with the students. To us as a couple and both educators, it was always the students who came first,” emphasized Bluestone. “I am also proud to say we had six children of our own and that they all knew the importance of a quality education and they all graduated with honors. Education and culture awareness were my two main goals and wanting the kids to graduate always kept our ‘eye on the prize’. I want to thank the many people who were a part of my career and made it so enjoyable, especially my wife and the kids.”