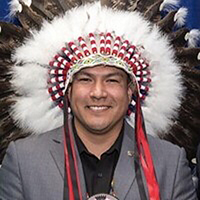 He was born in Los Angeles, California on October 06, 1975 to Geraldine Shepherd and In 1981, he moved to Wilmot, South Dakota and grew up at the “old place”.  In 1989, he moved to Crawfordsville of Agency Village until the passing of his mother in 1995.

He attended grade school at Tiospa Zina Tribal School from 1989 to 1993, and graduated in 1993 a valedictorian. Throughout his time in grade school, he was a good student and excelled in basketball, track, and football. In his younger ages, he was a grass dancer. He loved sports so very much and played in many softball and basketball leagues throughout his life. Robert enjoyed life to the fullest, he loved music and dancing and made friends everywhere he went. He had an infectious laugh and always lit up any room he lked into. His greatest accomplishments were his children who he loved spending time with. He would take them on annual family trips and their Christmas celebrations were at his sister Lorraine’s.

Robert was married twice throughout his life, first to Jermaine Eastman in 2001, and from this union they had Darian Shepherd, his second oldest child. His second marriage was to Sarah Manning in 2013 which ended in a divorce one year later. Robert joined the Navy in 1996 and was honorably discharged in 2004. He was assigned to the USS Duluth LPD-6 Amphibious Class vessel and conducted two overseas deployments to Iraq. He was in the Navy and worked as the U.S. Naval Law Enforcement Officer, Boatswains Mate 3rd Class from 1996-2001. From 2001-2004 he served as the Master-At-Arms 2nd class and honorably discharged as an E-5 combat Veteran. Robert received the following Naval ribbons, Navy Unit Commendation, Navy Meritorious Unit Commendation, Good Conduct, Sea Service Deployment, Pistol Marksmanship Ribbon, Expeditionary Ribbon, Navy E Ribbon, National Defense Ribbon, and the Expert Rifleman ribbon. Robert received the following Naval medalsas well such as, Humanitarian Service Medal, Good Conduct Medal, War on Terrorism Service Medal, National Defense Medal, Expert Rifleman Medal and Armed Forces Expeditionary Medal. Robert then attended college at the Sisseton-Wahpeton College and later transferred to The University of North Dakota where he received his bachelor’s degree. He moved to Bismarck, North Dakota and worked at United Tribes Technical College as the Admission and Recruitment Specialist. During this time, he attended the University of Mary where he received his master’s degree in business administration.After finishing his education, he returned home and served as the Director of the Sisseton-Wahpeton Oyate Planning and Economic Development Department. Robert was approached by many elders and asked to run for the position of Tribal Chairman, which he did, and he won all seven districts when he ran as Chairman in 2011 and again in 2013.  He served two terms and, in this role, made many positive changes for not only Sisseton-Wahpeton Oyate but also for the Great Plains Region and across Indian Country.  Robert served as Vice-Chairman of the Great Plains Tribal Chairman’s Association, Coalition of Large Land Based Treaty Tribes (COLT) and was elected as the Secretary for the National Congress of American Indians (NCAI), Co-Chair of the Tribal Interior Budget Committee (TIBC), Secretary of the United Tribes Technical College Board of Directors and the South Dakota Board of Military of Affairs. He has testified on the senate floor at Washington, D.C. Robert was a visionary and brought innovation and a progressive energy in his leadership role. He was instrumental in developing the Tribal Supreme Court, Cobell Pilot Program and the Violence Against Women Act. One notable moment was Roberts meeting with President Obama to discuss the issues and opportunities of the Native Nations. After serving as Tribal Chairman, Robert developed Shepherd Solutions, LLC and served as President. Robert moved to Henderson, Nevada and did consulting with Tribal Nations and organizations. His dream was philanthropy work where he could give back to his people. Robert also served on the Board of Directors of Nis’to Incorporated. He served on the Desert Era Veterans.

Robert passed away in Fargo North Dakota surrounded by his family. Throughout Robert’s life, he impacted many people’s lives and was loved by many. He left a legacy that will echo for the ages.