Speaking up for voiceless animals in New Town, ND 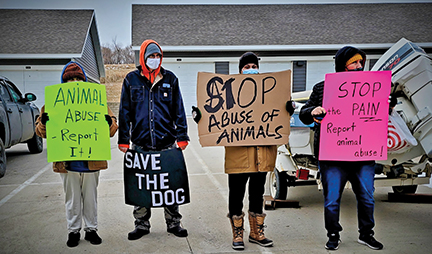 On December 26th, 2020, over a dozen people gathered in New Town, ND for a peaceful protest against animal abuse. Despite the below freezing temperatures and the fact that it was the day after Christmas, some attendants traveled over 70 miles from multiple directions.  Numerous members of the MHA Nation and representatives from various animal rescue organizations were also in attendance.

As reported on December 26th, by Malik Wilson with KXNews Minot, On December 18th, MHA Nation Tribal Member, Javanna Foote and her minor child witnessed alleged abuse against a dog on a balcony of their apartment complex. Foote states she reported these events to authorities and apartment management immediately. Over the weekend, while animal control was closed, she took to social media to get advice from the community. Foote posted her concerns in a North Dakota Surrender Group on Facebook, where the board member of a local animal rescue group saw her post. In addition to a detailed account of what Foote and her son witnessed she stated “Some people may say it’s just a dog. It’s not just a dog, it’s a living, loving, protective being.” Foote continues to explain “I haven’t stopped thinking of that poor dog.” 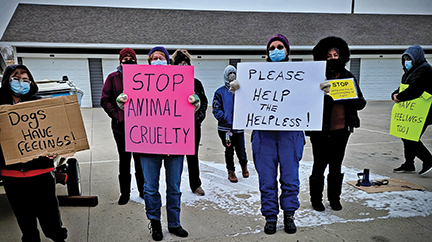 When Jacqueline Hayward Spegal, the board president of Stanley Animal Rescue Group (SARG) and an employee of MHA Times saw the post, she offered to assist Foote. She suggested that Foote let animal control know that the rescue had space if they needed to place the animal with a rescue. Additionally, she explained that they could ask the alleged animal abuser to do a “no questions asked” surrender of the dog directly to the rescue. At which time they could assign a foster home, get the pet veterinary care, and finally get the dog adopted into a loving forever home.

As Foote continued to post in Facebook groups and on pages, giving a voice to the voiceless dog, multiple other witnesses came forward. Each stating that they had also witnessed the dog being abused on the same balcony and some also stated that they had reported the incident to the authorities and/or property management. Hayward Spegal and Foote decided that a protest against the animal abuse may help push the dog owner to surrender if nothing else was working. Hayward Spegal Commented “To the owner: This animal can be surrendered to Stanley Animal Rescue Group, no questions asked. Just email [email protected] and I can respond with a surrender document, or I can drop one off with the apartment manager later today or even mail one if a printer is not available. Caring for an animal is a big responsibility and we do not shame anyone that surrenders an animal, there are always multiple factors at play. We do, however want to make sure that this animal is not abused and would be happy to help. There is also a temporary foster option, if there are things out of your control that are causing this situation that you need to take care of.” Hayward Spegal did in fact leave surrender documents throughout the apartment complex, but the rescue group did not receive a completed document.

While the protest took place, a few neighbors informed the protesters that they had not seen the dog in multiple days. The protest continued but protesters discussed their worries about where the dog could be. Movement was thought to be seen from the apartment but there was no sign of a dog. In fact, the original description of the apartment included Christmas lights and those had also been removed prior to Christmas.

The protest itself included a speech directed towards the abuser from Hayward Spegal followed by the crowd chanting “Stop Animal Abuse” the crowd stood in a straight line and faced the apartment where the alleged abuse occurred. Hayward Spegal pleaded with the abuser to consider surrendering the dog, explained that the public would not go away and that authorities would continue to be called if abuse occurred. A few additional neighbors came out and shared what they had witnessed with protesters as well. Even previous tenants of the apartment complex showed up to share their stories also, including Nellie Boyde. Boyde stated that she had also witnessed the dog being abused on the same balcony and that there were two dogs at that time. She verified that she reported the incident at that time by calling 911. The protest and stand-in lasted nearly an hour. 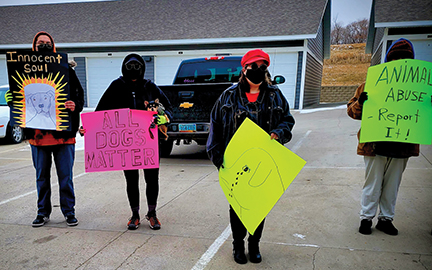 Hundreds of followers, that were not able to attend the protest the day after a holiday on short notice, took to social media before, during and after the event. Over 300 people signed a Change.org petition, hundreds more shared and commented on posts about the issue on Facebook. After the KXNews story broke later that night the number of animal lovers following the situation continued to grow quickly. As with many horrific situations, sometimes people look to blame someone. The Stanley Animal Rescue Group, Hayward Spegal and Foote all want to remind everyone that this situation is not to be blamed on law enforcement or animal control. With all social dynamic situations there are multiple factors at play but animal abuse, or any abuse for that matter- is at the fault of the abuser alone. Because of privacy policies, complainants may not receive an update but that does not mean that the situation was not investigated or that it is not being handled by the appropriate agencies.

One anonymous donor came forward willing to pay the alleged abuser for the dog and was willing to immediately release the animal into the rescues care and pay towards some of the vet expenses. As discussions centered around this new option, there was a change in the situation.

A few comments appeared and disappeared just as quickly on social media posts stating that there was not a dog at this location. Upon further investigation, a witness in the apartment complex states that there had been two men that lived at that location previously. The dog nor one of them have been seen since the original post went viral.

The President of the Stanley Animal Rescue Group asks that wherever the dog is now, that if the current owner cannot keep the animal safe and unharmed that he or she be surrendered to SARG or any other local animal rescue with space. The Stanley Animal Rescue Group has space and donors ready and willing to take care of this specific dog. There is a “no questions asked” surrender option which means that no reason for surrender would need to be included in any documentation. As the dog is believed to no longer be at the location that witnesses had posted on social media and likely neither is the abuser- SARG asks that the potentially innocent residents of the location and especially innocent neighbors not be bothered by the public.

SARG urges the public to report any abuse that they see to local authorities and local animal control if you have one. Understand that because of privacy rules, you may not hear back on updates but that does not mean that the situation is not being investigated. If you are in a domestic violence situation and fearful for the safety of your pet- temporary fostering is an option for your pet to remain safe while you escape your own abusive situation. Additionally, if you would like to support the efforts of the Stanley Animal Rescue Group you can donate via PayPal at paypal.me/stanleyanimals additionally available pets for adoption, volunteer and foster opportunities can all be found at www.stanleyanimals.org. Donations to any local animal rescue can aid in the prevention and intervention of abandoned, stray and abused animals.