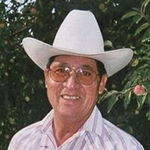 Angus Bernard Fox, 84, New Town, died Wednesday, December 16, 2020 in his home under the loving care of his wife, Ira and youngest daughter, Bethany.

Angus was born May 12, 1936, in Elbowoods, ND to Guy and Grace (Parshall) Fox. He was a member of the Prairie Chicken Clan and a child of a Flint Knife Clan. He was educated at the Shell Creek Day School and Elbowoods High until the rising waters of the Garrison Dam forced him to finish his senior year as a Cowboy at Killdeer High School.

Angus was not only a cowboy at Killdeer High but became one of the most successful cowboys in the state of North Dakota. His career started when he was about 14 or 15 at the Fettig Rodeo just northwest of Killdeer. They were having a wild horse race and Buzz Fredericks asked if he could ride. Angus said, “they got the horse down. I got on, and went this way, and that way, and back this way and it was done. I stayed on and won.  It was the first thing I ever won in my life.”

Angus rode collegiately in 1958 at Dickinson State College for the rodeo team consisting of Tex Appledorn, Dale Jorgenson, Dale Little Soldier, Pete Fredericks, his brother Esley Thorton, and himself. The team captured the Rocky Mountain Regional Championship. That win allowed the team to ride at the National Championship Rodeo in Colorado Springs, CO, where they finished third.

Many who spoke of seeing Angus ride, described his style as more finesse than brawn. Being in tune with the horse. Moving as it moved. Anticipating.

Angus could have turned pro and went on the rodeo circuit, but his sensibility and dedication to his children and family kept him in North Dakota and led to a 40+ year career in the Bureau of Indian Affairs, starting out as a bus driver in Twin Buttes in 1962, facilities maintenance then management in the 1970s in Mandaree and New Town, with him taking over as Facilities Manager for all of Fort Berthold in 1980, to his last assignment starting in 1992 as Agency Administrative Officer, which included acting Superintendent of the Fort Berthold Agency until his retirement on June 30, 2003.

After his distinguished riding career ended, he was as a rodeo judge for numerous rodeos including the NDRA Finals for seven years, numerous high school rodeos and a collegiate rodeo with his older brother Esley. He also did rodeo instruction for high school and instruction for qualifying issues for the Great Plains Indian Rodeo Association prior to their finals.

After leaving the rodeo life, he continued raising mainly Paint horses as a member of the American Paint Horse Association for many years after his retirement. His love for horses started at an early age when his family lived in the Shell Creek area. That love continued through his rodeo days and well into retirement when he would drive down to his ranch daily to feed his 30+ head herd. The sound of his voice was all his horses needed to hear to make them come running.

Once his rodeo career was over, another passion he held onto through his entire adult life started to ramp up – singing with the Mandaree Singers. Angus was always a very traditional man, serving as Senior Pallbearer numerous times as part of the Hidatsa clan traditions, as well as writing numerous honor songs for individuals throughout the reservation and beyond. He could always be seen at powwows sitting in his pickup or at the drum listening to his cassette recorder, getting ready to sing the song a donating family was requesting for a loved one.

He particularly enjoyed the camaraderie with his fellow Mandaree Singers and everyone on the Pow-Wow trail. Having sang with Mandaree singers Billy Baker, Art Smith, Finnigan and Norman Baker, Burt Yellowwolf, John Sitting Crow, Seamore Eagle Speaker, and his brother Rex Fox just to name a few. He was known for his teasing of young and old alike, and for his “Syox (Sioux)” and “Wong” jokes not once or twice, but many times, most times barely managing to get the joke out before erupting in laughter.

With all his accomplishments, Angus always remained a very humble man. When people spoke of his accomplishments in rodeo or singing, he was quick to deflect the praise for those that served in the military, to whom he looked up to including his brothers Esley, Rex and Maynard and numerous relatives.

One of Angus’ proudest moments came when he was inducted into the North Dakota Cowboy Hall of Fame in 2009 in Medora, having been nominated by former college rodeo teammate and lifelong friend Dale Jorgenson.

Angus was raised in a strict Catholic family. He remained active throughout his life including regularly reading during mass for Father Stephen Kranz at St. Anthony in Mandaree and later for Father Lukach at Saint Anthony in New Town. When he was unable to attend church, he regularly watched it on TV.

Above all, Angus lived his life with values he learned early in life, and passed down to his children, many nieces and nephews, grandchildren and others. He understood that actions always speak louder than words. The values of responsibility, dependability, punctuality, honesty and keeping your word most times weren’t taught with words but through the example he lived on a daily basis. While his stern teachings seemed harsh, those lessons and examples became crystal clear once we became adults and parents.

While he was blessed with tremendous athletic talent throughout his life in whatever sport he chose, Angus worked hard at staying in shape mind and body. Whatever sport, the pinpoint concentration, the determination for improvement, the hard work was always there.

When his son Mark took up golf in high school, Angus also began playing. When he was riding, he used to joke that he couldn’t get what people saw in chasing around a little white ball. He became pretty accomplished at it. When he wasn’t golfing with his boys, Mark, Bernie and Scott, he was golfing after work with Ed Lone Fight and Jimmy Bluestone to name a few.

In keeping with his strong Indian traditions, Angus was a member of the Kit Fox Society. He took his uncle Charles Parshall’s position. He also sang society songs for the Antelope Society.

Public Graveside Service and Interment:  Monday, December 21, 2020 at Noon at St. Anthony Catholic Cemetery, Mandaree (A boxed lunch will be available after burial. Giveaway will be reserved for the memorial later.)