The Story of MHA Nation Lives On

The Timeless and Unique History, Cultures and Languages of the MHA Nation to be Protected, Preserved and Honored in New Facility

The history of the MHA Nation is a timeless story that will now be forever protected and preserved within a modern facility like no other. Located near the Earth Lodge Village west of the Four Bears Bridge and Four Bears Casino and Lodge, the view around the MHA Interpretive Center is breathtaking. 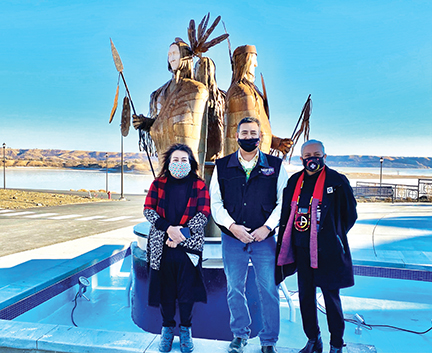 The story of the local tribes that have been the caretakers of the land of water in this area is also a wonderful but sometimes tragic story. Chairman Mark Fox believes that the facility exhibits need to tell the truth about the major struggles and how the Mandan, Hidatsa and Arikara people were able to survive through both the good and bad times.

“We were in fact the first farmers of this beautiful land. It’s a fact that the government divided our people when they built the (Garrison) dam. It’s also a fact that the first time the US government used biological warfare was when it was used on our people the time they gave those infected smallpox blankets to two of our tribal women. They knew those blankets were infected. All of these exhibit halls need to tell all of those stories, as tragic as some of these kind of events were for our people. We need the entire truth to be told,” stated Chairman Fox.

The new facility is scheduled to have its official grand opening tentatively in February. Fortunately, the facility is already at a construction stage where Chairman Mark Fox could see just how much it will create awareness by telling the MHA Nation’s unique story of bravery, survival and pride.

Chairman Fox has been supportive of the cultural center from the moment he learned about the vision by so many devoted tribal members from the MHA Nation. Although it is yet to have any artifacts or historical archives in the facility, the Tribal Chairman envisions the future of the MHA Interpretive Center and how the entire world will learn the truth and proud history of the MHA Nation. Chairman Fox recognizes the vast knowledge that will be gained by coming to the facility after its completion.

“Being a historian of our three nations, not only have I had the formal training, I’ve been blessed on the Arikara side by learning all about the Old Scouts passed on to me and I accepted that honor. I have continued to learn more and more about the history of (MHA Nation). Just walking through here even at this stage, it’s amazing. I’m excited by the layout and features. When others write our story, it is not accurate. We need to make sure our story here is the truth and not based on other people’s perceptions. We survived and things are coming full circle. This is who we are and this is why we are still here, surviving and thriving,” said Chairman Fox. “This project will bring together all aspects of (MHA Nation) history, culture and language – yesterday, today and tomorrow. 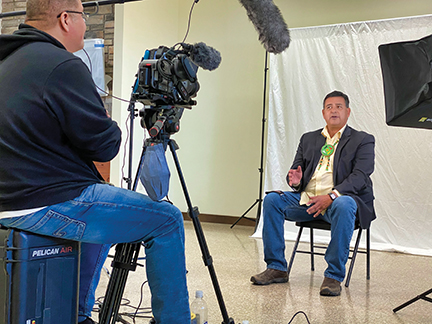 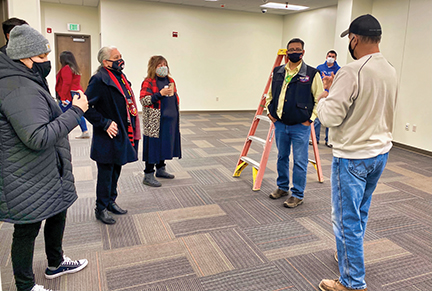 When someone comes through here, whether it’s our children or children from outside our tribe, they will learn the history, culture and language of the Three Affiliated Tribes. Our own tribal children will be able to absorb that pride and say, ‘That’s who I am!’ They will get a better direction towards a good path in life. We are going to get people from outside here and this center will increase their knowledge of who we are and the mark we have left and continue to make in this world as the MHA Nation.”

The overall cost for the entire MHA Interpretive Center project is approximately $22 million but the value to the MHA Nation will be priceless because it will help preserve the amazing history of the tribal members starting back thousands of years to the present.

Over the last 18 years, an amazing dream of the MHA Nation having a center that would preserve the unique history of the Three Affiliated Tribes has steadily grown into that of an amazing reality. It has been a long and winding journey for the ones involved with the project. Last week, Tribal Chairman Mark Fox and North Segment Councilwoman Monica Mayer MD, were both interviewed for a documentary that will be completed after the grand opening in February. Councilwoman Mayer will be focused on survival for the future as well as preserving the history, culture and language of MHA Nation.

“Prior to Lewis and Clark wintering with us, we had a population of about 40 to 50 thousand people before the epidemics that took so many of our people. Now we have built ourselves back up to about 17,000 tribal members. But we are still not safe because of the new virus among our people but another primary problem to our people has been brought in once again by outside individuals and that is the drug problem,” stated Councilwoman Mayer.

The story of the MHA Interpretive Center is like the blue Missouri River design on the floor. The blue river design feature winds through the center and the many exhibits rooms in conjunction with the initial historical timeframe of how the Mandan (Nueta), Hidatsa and Arikara were an integral part of the mighty river and all of the sacred elements of the water. Delphine Baker, the Interpretive Center administrator, noted that the project has been in the works for the last 19 years from its earliest conceptual stages.

“The interpretive center will have a life of its own and the stories will be not just that of the trauma but also of the great culture that has always been here long before the coming of the explorers from Europe. Yes, it is a survival story because of what happened to us, but it is also a story of a beautiful people and a way of life that was harmonious with the earth and river,” said Baker.

Throughout the center and exhibits, the rich beauty and culture of the MHA Nation will be highlighted in every way because a lot of planning and work has gone into the project. Baker is excited to be part of such a historical center that will be a source of pride for every MHA Nation tribal member. The facility has a large outside amphitheater, a golden art piece with three chiefs produced by Kathy Whitman in front of the facility and cultural designs in every aspect of the construction. The sacred and priceless archives will be housed in fireproof drawers and there is a fire prevention system that is modeled after the one in the Smithsonian Museum in Washington D.C. If there ever was a fire, it would be extinguished by a modern system that automatically sends out a harmless gas that would stop any flames.

A documentary is being produced from film and photographs throughout the entire process from the beginning. Justin Deegan and Elijah Benson have collaborated to accumulate hundreds of hours of footage and photographs that show how the vision became reality progressively. Deegan also has compiled a lot of drone footage that gives an aerial view of the project as it began from the groundbreaking last year.

Deegan indicated that he was elated when Baker asked him if he was interested in producing a documentary on the facility from beginning to the finale of the grand opening.

“Back in October, Delphine called and said she wanted a full feature documentary with a three-part story,” Deegan noted. “The first part is about the vision and the visionaries, the second part will be the actual construction of the building and all of those stages, and the grand opening will be the actual finale for the documentary. The entire documentary will be about 45 minutes long so if PBS or any other media wants to use it, they can do an hour long segment that would include their commercials. Chairman Fox and the Tribal Council is very supportive of this entire project and the documentary. I have worked hard with Elijah to make sure the documentary is all of what they want and I am thinking about calling the documentary ‘The Long Game’. That is because the ones who envisioned this project were thinking long into the future of how this would become a major facility on the reservation.”