Last Thursday, at the December Tribal Business Council (TBC) meeting at MHA Nation headquarters, tribal leaders honored Trey Brady in a special ‘send off’ to Fort Benning, Georgia. Brady, the son of Winona Goodleft and Jason Luke Morsette, will serve his country in the United States Army. Brady, who’s native traditional name is Abaxi Wisci (Sky Tale), was presented with a war bonnet and other special gifts from the MHA Tribal Business Council as readies for his stint in the military. 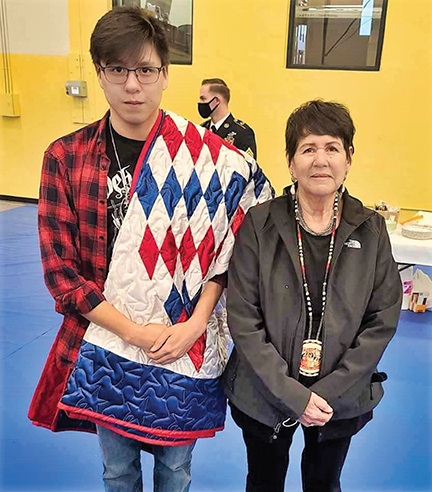 Brady was employed as an administrative assistant and worked in special projects for Councilwoman Judy Brugh of Four Bears Segment. He will soon be leaving for basic training in less than a month to Fort Benning, Georgia on January 4, 2021. Brady was moved to enlist in the military for a variety of reasons but it was mainly his love for the land and the people that has inspired him.

“I thought about how my dad served to protect this land in a patriotic way. I decided to go in because I also believe we are here to protect the land, so my goal is to follow in my father’s footsteps. I want to keep the legacy of service to defending our freedoms and way of life,” stated Brady.

Brady’s father, Jason Luke Morsette, was an Airborne Ranger and in the 82nd Airborne Division who took his own oath in 1994. Morsette served four years in the Army before he returned home to MHA Nation.

“A couple of months ago, (Trey) came to my house and we sat down and I told him what it is like and what Ranger school is all about,” Morsette recalled. “He is going to be an 11 Bravo so we will both have the same MOS (Military Occupational Specialty). The opportunities are out there for him and I want him to go out and see the world and tell him to take it day by day. He will definitely have some challenges but I encourage him to meet them all and he has the ability to do it. When I was in Ranger school, we started with 300 candidates and I was the only Native American. We ended up with four platoons of 36 Rangers, so less than half made it through Ranger school. I can say that after ‘Hell Week’ I was one of the last ones standing. You always want the best for your kids and I have always encouraged him to do better than I have. I’m happy that my son is going in and as an 11 Bravo, the motto is to be ‘fight harder and go further than any other soldier’. We are not promised tomorrow so I want him to succeed every day, even when he goes to college.”

Besides his father’s service as an Airborne Ranger, Brady’s grandfather Arnold Morsette also served in Army and is a veteran of the Vietnam War. So the call of military service is strong within the 22-year-old MHA Nation tribal member.

“I was going to wait because I really didn’t want to leave (Councilwoman) Judy (Brugh) but I figured if I didn’t do it now, I might change my mind. Motorcycling is something I like to do. I was driving around one day and the song ‘In the Army Now’ by Sabaton came on. Sabaton is a power metal band and that was my decisive moment. I called my dad right after that and I asked him ‘How does one become a ranger?’ So we talked about me being a Ranger and he was honest about it all and he is my inspiration. After my dad and I spoke, I met my recruiter right after that, Sergeant First Class Christopher Newell.”

Brady is eager to learn as much as he can in the Army. He has a high interest in modern technologies and is very mechanical-inclined. As he prepares to begin basic training in Fort Benning, Brady already has attained a vast knowledge of military weaponry of all kinds, including those from foreign countries. Military history is also one of Brady’s passions and he knows every aspect of the wars that have taken place in the past and what the present situation is in the world. He will begin his Army career as an infantryman but the dream of being an Army Ranger is the goal he has set for himself. He concluded by stating that he wants to be strong like his dad who he says emulates a warrior by being both physically and mentally strong. 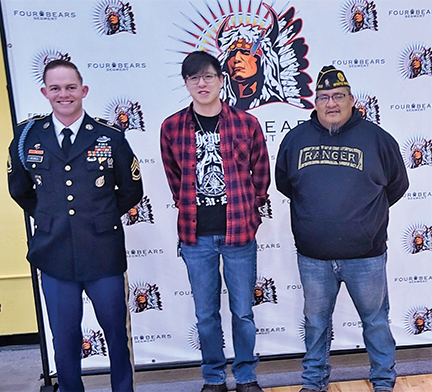 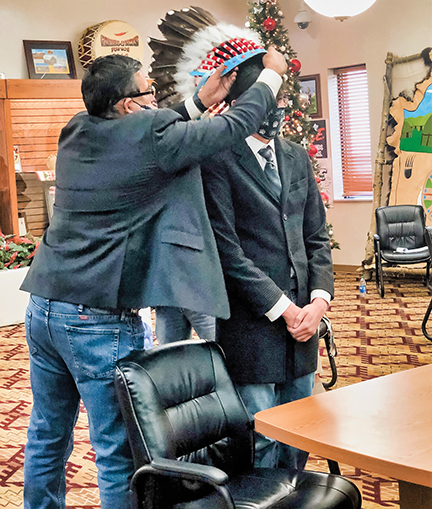