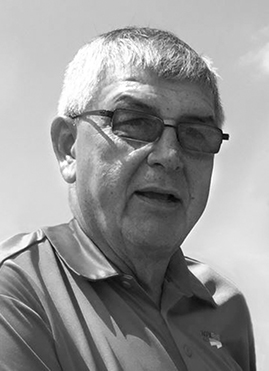 John Allen Charging was born on May 28, 1955, in Parshall, ND to John and Grace (Charging) Henry. John was a member of the Knife Clan and an enrolled member of the Mandan, Hidatsa and Arikara Nation (MHA). He was baptized in the Catholic faith and a member of the St. Anthony Padua Catholic Church in New Town, ND.

He attended the Wahpeton Indian School until eighth grade. While a student a Wahpeton, John earned the highest honor of Eagle Scout with the Boys Scouts of America. After eighth grade graduation he then transferred to White Shield High School where he was a gifted athlete and excelled in track, football, basketball, and rodeo.  He also served in student government and was Class President. He graduated from White Shield High School in 1973 with honors and later that year in December he married Marilyn Jean White and from this union his daughter, Leonika Rose Charging was born. After high school graduation he was offered a full football scholarship from Dickinson State College where he was a standout football player for the Dickinson State Blue Hawks for four years.  He loved the game and all that comes with it; the competition, training and teamwork. His skills as a lineman and his intense work ethic earned him an All-Conference Football Player award along with many other honors. He attended DSU from 1973-1977 and received his Bachelor of Science Degree in Business Administration. He also received a Tribal Management degree from the University of South Dakota in 1987.

John was a hard worker and held difficult jobs in the construction field, erecting grain elevators with his dad. He also worked in the oil fields of the Ft. Berthold Reservation as a floor hand and roughneck and in the meat packing industry as a lugger in Sioux City, IA.  In these early employment years, he worked tirelessly to provide for his family.

After graduation from college at DSU he was employed as the Director of the Food Distribution Program for all of the reservations in North Dakota and worked for Job Service of North Dakota. The following year he was hired by the Three Affiliated Tribes as the Director of the Tribal Employment Rights Office (TERO).  At the time, TERO was burgeoning and new department adopted to empower tribal member employment. As an early Director of TERO, he was responsible for enforcing Indian Preference on the MHA reservation for the tribal members. From 1984 to1987, John was elected to serve as an MHA Tribal Councilman for the New Town/Little Shell Segment and elected as the Secretary/Treasurer for the Executive Committee of the Tribal Business Council. During this time as a tribal government official he worked on many initiatives to bring economic development to the Ft. Berthold Reservation.  He aspired to create economic opportunities, job growth and business development so tribal members could live at home and provide for their families.  This was very important to him as an elected leader. In 1988 he continued his serve his community as a Summer Youth Coordinator and a Supervisor of Job Insurance and Job Placement activities for JTPA, Job Corp, and Summer Youth Employment.  Prior to his retirement on June 5, 2015, he served as Tribal Enrollment Director for the MHA Nation.  Most recently, John was a member of the 4 Bears Casino & Lodge Advisory Board.

John met Renee Mayer, the love of his life and called her his Dream Girl; from this union they had one daughter Monika J. Charging.  John loved to travel with Renee and Monika in their many road trips all over the country.  He enjoyed endless family outings as well as camping and attending sporting events as a family; and cherished time spent with his grandsons Justice and Phoenix.

John treasured his time enjoying the outdoors.  He was an avid hunter, fisherman, boater, camper and die hard NDSU Bison fan. He was a member of many conservation associations dedicated to restoring and keeping hunting and wildlife areas available for hunters and fisherman. He also loved the game of golf and participated in golf leagues and tournaments all over the country. He traveled to several professional golfing tournaments and so enjoyed all aspects of the game from the competition to the sportsmanship. He valued the lessons that sporting, and competition teach, such as commitment, dedication, preparation and of course hard work; and he worked to pass that on to younger athletes, always supporting his home teams.  With his energy and love of sports and youth; he introduced his stepson Nathaniel Mayer to the game of golf at the age of 7; where he learned great golf skills and has excelled ever since.

He was also a skilled and expert poker player, having participated in tournaments all over Indian Country to Las Vegas, but was most at home playing a hand at 4 Bears Casino & Lodge. John understood cards and gaming at an extremely high level and was a respected player by many. He was a man of many talents, and an excellent cook, baker, chef and grill master. Beyond these activities what John enjoyed most was people.  He enjoyed visiting with people and connecting with common interests and talking about events and sharing stories.  He was always one to rise early, start the day with a fresh cup of coffee and live each day to the fullest. Even in his retirement, he remained active and busy, rising early and making the most of each day. John could be seen at Edgewater Golf Course with his senior golfing buddies for an early morning round of golf. He will be greatly missed by his family and his many friends who loved him and enjoyed spending time listening to his stories and jokes.