Alejandro Jose Moreno Jr. “A.J.” was born on September 17, 1985, to Katherine (White Bear) Rush, at East Los Angeles County General Hospital. From the moment A.J. pulled himself into this world he ran by his own “rulebook” and no one could say “no “to him. He was always a very imaginative child that was obsessed with dinosaurs.

As he grew up, he attended West Covina, North Fork Elementary Schools. In June of 1994, the family moved to North Dakota and he then attending Parshall Elementary School. He went on to attend and graduate from Parshall High School in 2004. Throughout his youth, he enjoyed all sports. He especially loved, and was 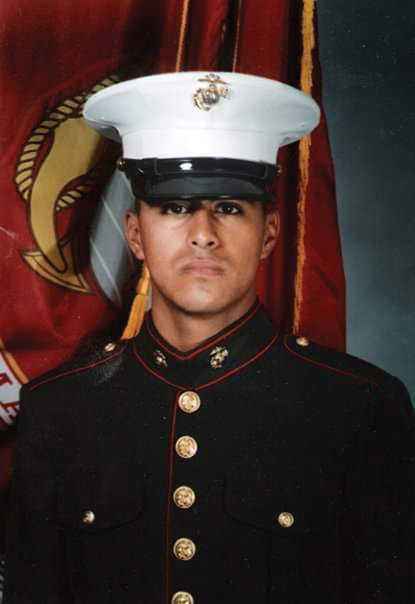 incredibly talented in, Track & Field running hurdles, long jump, and pole vaulting. Although nothing surpassed his love and talent for football as #32 running back. Another favorite past time in his high school days was going to Dakota’s and jamming out on his bass guitar.

In 2005, A.J. decided to make the commitment to join the Marines. He served boot camp at Camp Pendleton, CA, as a part of 2 Battalion 7th Marine Regiment Fox Co. After boot camp he was stationed in Twenty-nine Palms, CA. He went on to serve two tours overseas, Iraq in 2007 and Afghanistan in 2008, where he earned his Purple Heart. A.J. was Honorably Discharged in 2009 as a Corporal. He gained many brothers while in the Marine Corps. He thought and talked of them often. He was so thrilled when he heard about the 2/7 Reunion in November 2019. When he came back, he couldn’t stop talking about how great it was to see and catch up with his brothers.

A.J. was the type of person that loved to visit; he was knowledgeable in a lot of topics. He especially loved talking about the Atlanta Falcons, the latest MMA Fights, Walking Dead, gardening, camping, Halloween, otters, and of course dinosaurs. He loved to cook, bake, and can vegetables from his garden. He found a true natural talent for smoking just about anything with the Traeger.

A.J. loved being around his family, friends, and his “Vietnam Vets”. He had a special talent of captivating kids of all ages and getting even the shyest kids to come out of their “shells”. He was definitely the “fun” Uncle to all of his nieces and nephews by blood or not.

Along with gardening, A.J. found solace in animals. He especially loved his Shepherds: Athena, Atticus, and Nixie. However, his bond with Huey P. Newton “Kitten Extraordinaire”, was incredible and hilarious. He looked forward to Huey P’s morning report every day when he would get up.

A.J. was a very caring, helpful, adventurous, and loyal soul. When he was hurting, he looked to help others instead of himself. On November 17, 2020, A.J. met his sunset and left this world to join his fallen brothers, grandparents, close friends, and “his” Shepherd Athena. He will forever be in our memories and hearts.

A public visitation with final reviewal was held Monday, November 23, 2020 from 10 a.m. to 1 p.m. at Langhans Funeral Home, Parshall with a public graveside service and burial at 2 p.m. in Old Scout Cemetery, rural White Shield.