Bring on the vaccine

Nearly two-thirds of North Dakotans said in a recent poll that they would take a free COVID-19 vaccine approved by federal authorities, a figure that health experts welcomed as an encouraging sign the state could reach herd immunity as the vaccine rolls out in the coming months.

The poll found 62 percent of North Dakotans would take a no-cost vaccine approved by the U.S. Food and Drug Administration to prevent the coronavirus. Seventeen percent said they would not take that step, while 21 percent were not sure.

Molly Howell, the immunization program manager for the North Dakota Department of Health, said their goal is to have 70 percent of eligible residents accept the vaccine, a number she said national experts indicate is needed to achieve “herd immunity” and prevent ongoing virus transmission. 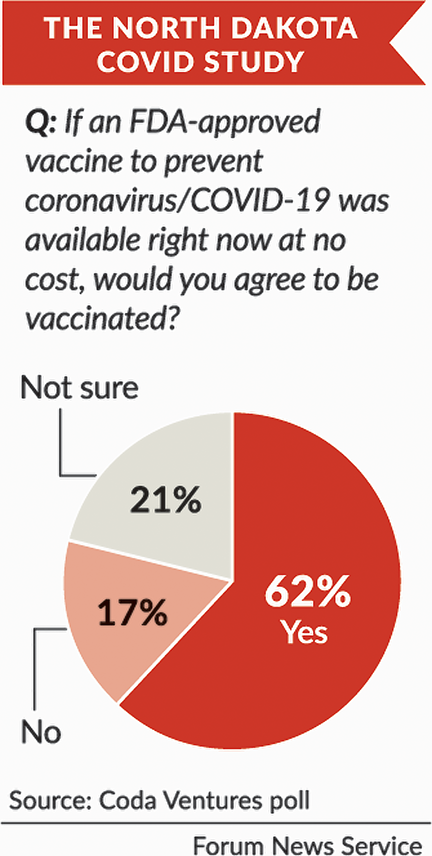 “I think for right now, that’s an acceptable amount of people who would be willing to take the vaccine,” Howell said, noting that there are lingering questions about the pending vaccines. “I think right now, it’s OK for people to feel a little hesitant.”

Dr. Paul Carson, an infectious disease specialist and public health professor at North Dakota State University, was also encouraged by the poll results and said the number of unsure respondents puts the state within reach of the 70 percent goal.

The poll was commissioned by the North Dakota Newspaper Association in partnership with North Dakota United, the education and public workers union. It surveyed 400 people across the state about various aspects of the pandemic.

Pollsters were gathering responses when news first arrived that drugmakers had developed highly effective vaccines, providing a much-needed hope that the fight against COVID-19 was about to turn a corner.

But inoculating a large amount of the population will take time. Health care workers and those living in long-term care facilities are likely the first in line for a vaccine, with teachers, police and people with underlying health conditions following, Howell said. Members of the general public may have to wait until spring, she said.

Until then, health experts are urging people to take precautions like wearing masks, social distancing and avoiding crowds.

National polls have showed Americans’ attitudes about taking a vaccine have shifted as the pandemic wears on.

Two-thirds of respondents to a Gallup survey said in July that they would take an FDA-approved, no-cost vaccine, but that number dipped to 50 percent in September before rising to 58 percent a month later. People who said they wouldn’t get inoculated cited the vaccine’s hurried development and said they wanted to make sure it was safe.

A draft vaccination plan from the North Dakota Department of Health, dated mid-October, acknowledges that only half of Americans appear to be willing to get vaccinated. It said the process for allocating a vaccine “needs to balance expediting vaccination with risks of wastage” if people are hesitant to take it.

Nashville-based Coda Ventures, which performed the NDNA online poll, did not question North Dakotans on reasons for their wariness.

Howell said vaccines are going through a rigorous approval process despite the quickened development. She lamented that the issue has been “politicized” in recent months and urged people to seek out information from credible sources.

“The last thing anyone wants is a vaccine that is not safe, is not effective and will hurt confidence that we will routinely use in the United States,” Howell said.