Songs and Honoring for Veterans

The traditional drum songs honoring veterans echoed down across the rolling prairie north of Bismarck this week during a Veterans Day honoring. The event was hosted by the Sage Coulee Outreach and Wellness Facility that serves the MHA Nation. Opie Day and Desirae Desnomie who are students at United Tribes Technical College in Bismarck said it was a great honor to do the flag song and veterans song for the people in attendance. Most of those were the staff of Sage Coulee Outreach and 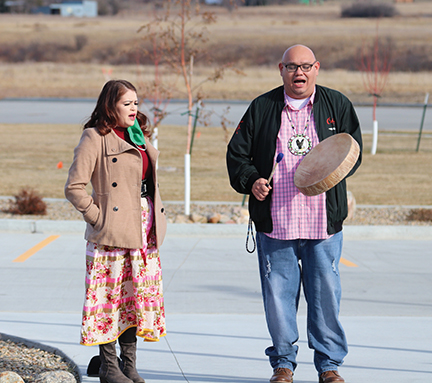 Wellness. The facility’s director is Mark Little Owl and he offered the reasons that it was done to honor the veterans who served with distinction because often people do not recognize how much so many veterans gave to protect the freedoms of the United States of America. Little Owl wants to do his part in recognizing those sacrifices. Only 8% of military families feel the general public understands the sacrifices they make, according to the Blue Star Families 2019 Military Family Lifestyle Survey.

“Damon Brady, who works at the office as our Exercise and Fitness Facilitator had a great idea to acknowledge and honor Veterans Day by asking Opie Day and Desirae Desnomie to sing a couple of songs. They are both very well-known singers across Indian Country. This wasn’t a planned community event, just an event with staff. Maybe down the road, it could possibly be a bigger community event. The Sage Coulee Outreach and Wellness Facility’s very own staff member Kelly McGrady (RN), gave a lovely prayer. We are thankful we can all be here today to do such things with the many sacrifices and the freedom given to us by our US veterans,” Little Owl stated.

McGrady works as the facility’s nurse facilitator and as a U.S. Army veteran,  knows firsthand the sacrifices of the veterans and why the public needs to be aware of what military personnel and their families go through.

MHA Nation Tribal Chairman Mark Fox was in Bismarck for other meetings Tuesday, and took the time to join the staff in the Veterans Day Ceremony near the flagpoles outside the Sage Coulee facility. Chairman Fox is a United States Marine Corps veteran and Tuesday was the 245th birthday of the Marine Corps. (See related story, Marines Honored on 245th Birthday)

Chairman Fox spoke to the staff and thanked them for the honoring on behalf of all veterans of the MHA Nation. He recounted a meeting he had in Washington D.C. with the current President and other tribal leaders. Chairman Fox was one of only two tribal leaders who were allowed to present to President Donald Trump that eventful day. Chairman Fox shared with the President at the time some main points of concern in the economic and social areas, but his third and final point was made in a letter that he handed to the President that emphasized how Native Americans serve much more per capita than any other ethnic group.