MHA Nation Chairman Mark Fox and Tribal Administration Show Appreciation to ‘The Few, the Proud’ for Their Dedication to Country and Freedom 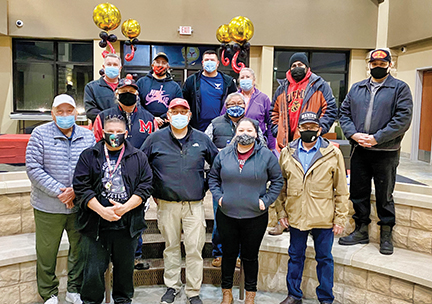 The special camaraderie between all United States veterans is well known. Their unique traditions are special and their many brave deeds in times of war are legendary.  From the day they were formed 245 years ago, the Marines have defied the odds in combat and have shed their blood in defense of the country.

Many of those brave US Marines were honored in a special celebration at the MHA Nation’s Energy Building on Tuesday, November 10, 2020. The event was sponsored by the MHA Tribal Administration and although it was a limited celebration because of COVID protocols, the Marines who came appreciated the to-go meal and the gifts they received. Bernadette White Bear, Veterans Office Director for the White Shield Segment, helped host the event and was gracious to every Marine who came into the building. Her love and respect for all veterans is strong, but she understands and felt the US Marine camaraderie that evening.

” The Chairman asked me to help out and that’s what I did,” stated White Bear. “I appreciate everything Chairman Fox does for the Marines and all veterans, but he does this special birthday celebration every year on November 10th and that includes any marines in the surrounding area. I served in the Marines because I heard it was the hardest branch and I wanted to see if I could do it.”

White Bear was honored for serving over 22 years as a United States Marine as a member of the Aviation Operations unit. She was presented with a Pendleton blanket from tribal administration staff for her assistance in the event and for her long military service as a US Marine.

“I wasn’t expecting anything but those girls from the chairman’s office made this go off so well. Putting this on for us so we can have a birthday this year is always special. But for us Marines, it doesn’t have to be an elaborate thing, Marines celebrate in their own way with maybe just two of them sharing a bottle of water or when they have the chance. I’m glad the chairman asked me to help out,” said White Bear.

Special Projects Coordinator Amanda Bracklin was also honored to be a part of the event. She emphasized that it was special to her because of the feeling she got when observing the US Marine veterans as they connected for the brief moments that were allowed due to the COVID protocols that are in place to protect all in the MHA Nation. She also presented a blanket to Charles Foote for doing the opening prayer. Foote is a decorated U.S. Marine Corps veteran who served in combat in Vietnam. Bracklin and MHA Nation Public Information Officer, Lovell Overlie, worked together to make the event a memorable one for the veterans.

“Between Lovell and I, we managed to get it done and set everything up. I definitely would like to coordinate another one after hearing some of the Marine veterans’ stories. I want to know more and hear more stories and be involved in years to come. It was great to see the brotherhood between these Marines. One thing I would like to see next time is for us to prepare some short stories complied in a book about Marines and their special stories The Marines birthday is usually their time to tell stories and because of COVID they couldn’t really share, but I feel that what was done in the event was good for them and showed our appreciation for them all,” stated Bracklin.

Chairman Fox could not attend the event this year because of prior commitments for the MHA Nation, but he offered his gratitude and pride for the US Marines who came to the birthday celebration. He stated in an earlier event in Bismarck that he always recognized the Marines on their birthday because he is one of the few and the proud. As a veteran of the Corps, Chairman Fox knows the history of the United States Marine Corps 245 years ago from its birth in Philadelphia at a place called ‘Tug’s Tavern’ to the now elite combat fighting force they have been for nearly two and-a-half centuries.

The MHA Tribal Administration through the efforts of Chairman Fox and his staff provided $100 gift cards, a boxed meal from TDH, and much gratitude at a birthday party that was well-deserved.