BISMARCK, N.D. (AP) — After months of resisting ordering the people of North Dakota to wear masks and limit the size of gatherings, the state’s Republican governor relented in an effort to stem a coronavirus surge that is among the worst in the U.S. and that threatens to overwhelm the state’s hospitals.

Gov. Doug Burgum’s executive order Friday night came as a surprise and only hours before the state recorded new daily records for hospitalizations and infections. Throughout the pandemic, the former software executive had been 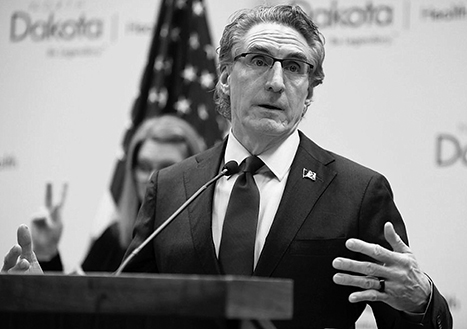 FILE – In this April 10, 2020, file photo, North Dakota Gov. Doug Burgum speaks at the state Capitol in Bismarck, N.D. After months of resisting ordering the people of North Dakota to wear masks and limit the size of gatherings, the state’s Republican governor has relented in an effort to stem a coronavirus surge that is among the worst in the U.S. Gov. Burgum’s executive order Friday night, Nov. 13, 2020, came as a surprise. (Mike McCleary/The Bismarck Tribune via AP, File

leaving it to individuals to take personal responsibility for slowing the spread of the virus, beseeching the public during his weekly press briefings to wear masks but emphasizing a “light touch” by government.

But in a video message announcing his new restrictions, which took effect Saturday and will remain in effect until Dec. 13, a somber Burgum said, “Our situation has changed, and we must change with it.”

In a news release, he said the state’s doctors and nurses “need our help, and they need it now.”

After a spring in which North Dakota had relatively few COVID-19 cases, the disease spread rapidly over the summer and has only picked up steam since. As of Saturday, there were only 18 free Intensive Care Unit beds and 178 non-ICU beds in hospitals throughout the state.

Health care professionals and some community leaders had been pleading for months with Burgum to impose such restrictions. On a tour of Bismarck last month, Dr. Deborah Birx, the White House coronavirus response coordinator, described the state’s mask use and COVID-19 protocols as the worst she had seen anywhere in the country.

Rachel Heintz, who works as an emergency room nurse at a Bismarck hospital, said Saturday that she was relieved a mask order was issued.

Nurses and other health care professionals have been frustrated that their calls for a mask mandate had been ignored, which probably caused increased cases, deaths, grief and an overwhelming burden on hospital workers, she said.

“Nurses are used to shouldering a big burden, but when you see us cracking, you know how big of a toll this is taking on us,” she said. “This is a step in the right direction.”

Under the order, people throughout the state must wear face coverings inside of businesses and indoor public settings, as well as in outdoor public settings where physical distancing isn’t possible. It includes exceptions for children under age 5, individuals with a medical or mental health condition or disability that makes it unreasonable to wear a mask, and religious services.

Failure to comply comes with a penalty of up to $1,000, though it’s unclear how the order will be enforced.

“We’re going to focus on education and will try very hard not to file charges,” she said.

Officers may respond to a call if from someone reports that another person isn’t wearing a face covering, she said.

“We will try to educate them and explain the new rules that we all have to abide by,” she said. “Hopefully, that takes care of it. That is our hope.”

Burgum also directed all bars and restaurants to limit capacity to 50%, and he closed all in-person service between 10 p.m. and 4 a.m. Large-scale venues also are limited to 25% capacity.

Not everyone will obey the new order.

Rick Becker, a Republican state representative who is a plastic surgeon and who owns two bars in downtown Bismarck, said Saturday that he will refuse to wear a mask and that he suspects many others in the conservative state will protest the “draconian” directive.

“The electorate is going to be split,” Becker said. “People who want the government to take care of them will be happy.”

Eating at a restaurant where seating capacity isn’t reduced and tables aren’t spaced at least six feet apart is in the The Centers for Disease Control and Prevention’s “highest risk” category for contracting COVID-19.

Becker, though, said he thinks the order to close bars at 10 p.m. is nonsensical.

“Where is the data that shows COVID comes out more after 10 o’clock?” he said.

Playoff championship contests and performance events sponsored by the North Dakota High School Activities Association during the month of November may continue under the order. But all high school winter sports and other extracurricular K-12 school activities are suspended until Dec. 14.

The order came after the state reached a grim new milestone on Friday, as its COVID-19 death toll eclipsed the 700 mark, according to state health data. Nineteen more deaths were added Saturday, bringing the state’s death toll to 726. More than half of the deaths have come in the past few weeks.

There were 2,373 new cases per 100,000 people in North Dakota over the past two weeks, which was the highest rate in the country, Johns Hopkins University researchers said.

Health officials on Saturday also recorded a new daily high of 2,278 new coronavirus infections, raising the statewide total since the pandemic started to nearly 63,000. The number of patients hospitalized with COVID-19 rose by 12 on Saturday, to a record 305.