This year has brought many changes to the Nation, one of those being an election amid a pandemic. At the same time the United States was having the 2020 General Election, MHA Nation also held the 2020 Tribal Business Council Election. Those that were up for election were West Segment (Mandaree), North Segment (New Town/Little Shell), and East Segment (White Shield).

For the first time in many years, the Tribal Business Council of the Three Affiliated Tribes of the Ft. Berthold Reservation consists of fifty percent men and fifty percent women. On Wednesday November 4, tribal officials including Chairman Mark Fox and the other current council members from Four Bears Segment and Twin Buttes, gathered outside the Northern Lights Community Building to hold the 2020 Inauguration of the newly elected officials. The event was held outdoors in the parking lot so that family, friends, and community members could attend as well while maintaining social distancing. 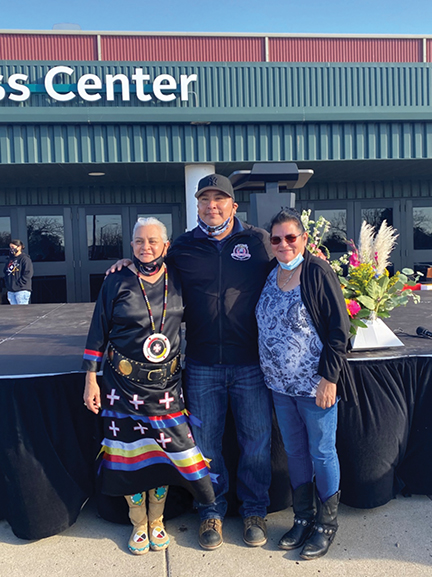 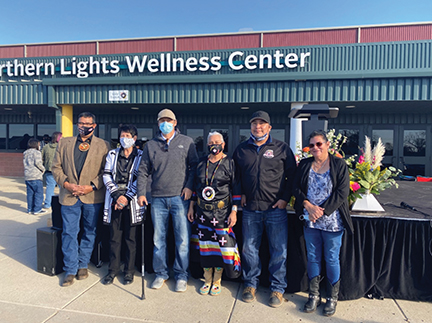 It was an ideal day for such a ceremony, with unseasonably warm temperatures outside and with the usual North Dakota winds picking up as the ceremony progressed. An opening prayer was given, then Chairman Mark Fox greeted everyone and congratulated the newly elected Officials. A proper swearing in commenced beginning with re-elected East Segment official Fred Fox. He was gifted with blankets from the council which were draped over him as he gave his speech. He mentioned how tough it was during the election process and campaigning not only on himself, but for his family and his fellow elected officials and their families. “It’s not easy”, he commented on having to run for council. He commended his council comrades on a job well done, then his sister Stacey Blacksmith conducted the swearing in ceremony with him. Afterwards, he gave gifts to numerous people including council and family.

North Segment official, Councilwoman Dr. Monica Mayer was also re-elected this year. This will be Councilwoman Mayer’s second term in office. During her speech, she gave thanks and she also mentioned that during her first election, she had her mother Avis Baker Mayer do her swearing in. Unfortunately, her mother has passed on since. This time around, two of her dear family friends/Hidatsa elders Iris Bird Bear-Obes and Adeline Brunsell helped swear her in.  Afterwards, she gave thanks to everyone who supported her and even to those that didn’t vote for her because “whether you voted for me or not, as long as you got out and voted”, she said. Councilwoman Mayer also gave out gifts to many people in attendance including council members, family, and community support.

Perhaps one of the most intriguing and noteworthy segment elections held this year was West Segment-Mandaree. A great deal of exposure and public information via broadcasting went into West Segment’s election process from the very start. At the finish line, Gladys Sherry Turner-Lonefight received the most votes needed to become the newly elected West Segment council representative. This will be Councilwoman Turner-Lonefight’s first term held on the Tribal Business Council. She was humble but visibly happy throughout the whole process. Rather than standing on stage, she brought the mic down to ground level for an easier means of access for her chosen oath helper. She gave thanks and let everyone know she is eager to go to work for her people as their council representative. After she conducted her swearing in, she also gave gifts out and gave more thanks to everyone.

Afterwards, Chairman Mark Fox congratulated the newly elected and re-elected officials again. “I look forward to working side by side with you all. This is the first time in a long time that the council has been made up of half men and half women”, he said. He also thanked those in attendance and those listening on KMHA Radio. Pre-boxed meals from Subway were then passed out by his staff. Family, friends, and colleagues gathered for photos and congratulations gestures. We look forward to their work for the people of MHA Nation in the months and years to come.