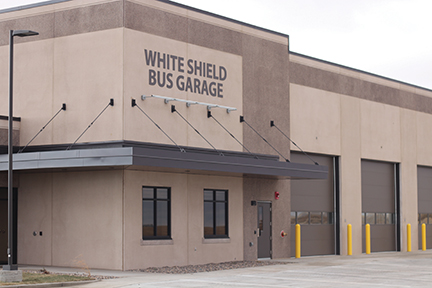 A virtual grand opening of the White Shield School Bus Garage took place last week and the spacious facility is a welcome addition to the community and school. With a bustle of construction activity going on all around him, Councilman Fred Fox cut the ribbon with tribal and school officials applauding the moment. All in attendance were excited to see the completion of another phase of infrastructure construction in the White Shield segment. The new bus garage is part of a huge master plan that has been conceived and put into action and reality through the initiatives of Councilman Fox and the strong support of the MHA Nation leadership.

“What we’re celebrating here today is another great step in progress for White Shield and the tribe,” stated Chairman Fox. “When you build a facility like this, it has multiple purposes that it can be utilized for. It will not only be a place to store buses and maintain them, this becomes a very critical place during these times of the pandemic and a place for testing where people can just drive into and not worry about the cold. The winter months are coming soon and the long-term benefits are going to be worth the investment.” 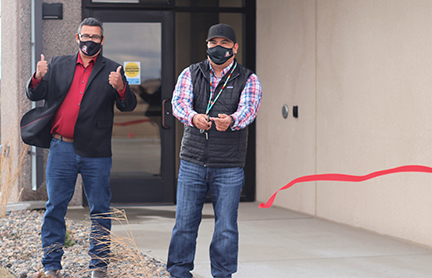 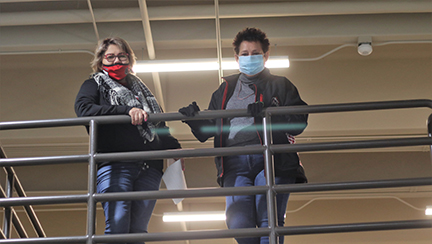 Chairman Fox praised several people for the success of the project and appreciates the vision that Councilman Fox has for White Shield’s future. The tribal chairman noted that Councilman Fox and his team have been the driving force in several projects that are vital to the White Shield community and the people who live there. Most of the major development has previously been centered in the New Town and Four Bears area, but Chairman Fox realizes the important need for infrastructure development in the more rural segments of the reservation such as White Shield.

Chairman Fox emphasized that the ultimate goal is to develop the infrastructure of the outlying areas on the reservation. He predicted that people who come here to White Shield five or ten years from now will hardly recognize the place

because of all the great progress and infrastructure being built now as part of the White Shield master plan.

The White Shield Bus Garage has 13,000 square feet and has ten garage doors that lead into very large bay areas to store and maintain the school buses. Additionally, there is plenty of extra space for offices, bathrooms, a break room, a maintenance shop, an in-house fuel dispensing system, along with a smaller second level or ‘mezzanine’ above those areas that can be used for additional work space. The facility also features a wash bay along with many innovative ‘green energy’ element features such as geothermal heating and solar technology in the rooftop.

The bus garage grand opening event also brought to light several other projects that are in the area adjacent to the state-of-the-art White Shield High School. The East Segment staff of Councilman Fox hosted the virtual tour of the bus garage and also emphasized the new Public Safety Building. The Public Safety Building will house a detention center, ambulance service and fire department and is set to be completed in the spring. Councilman Fox and his east segment staff team are also working on the completion of the new Head Start Center slated for opening in a couple of months. Councilman Fred Fox welcomed the attendees and the people who were watching virtually on the internet.

“We’re not really building everything at once, because it is all being done in phases in accordance with the master plan,” stated Councilman Fox. “This bus garage is a vital project for our community and so are all the other projects within the master plan.”

Councilman Fox called attention to the projects that encompass the development area for the White Shield Master Plan. The Ralph Wells Community Center which will have an indoor swimming pool, fitness center, indoor walking track, a gymnasium and movie theater is coming up fast south of the high school. The public safety building is in the final stages of completion, the Nishu Lodge Elders Center is completed and the White Shield Head Start Center is almost ready to host classes. The East Segment Tribal Administration Building is also complete and offices in that new facility are already being used by staff and other tribal departments.

Additionally, there is significant road construction going on in conjunction with the several building projects in progress. The bus garage virtual tour also featured White Shield School Superintendent Wayne Fox who expressed his gratitude for the projects that will benefit the students. School board official Danile Henry also gave praise for the ones who worked on the project and to tribal leaders for their support of it. People who were part of the virtual tour online were able to sign up for door prizes which were given out in appreciation to the community by the East Segment – White Shield offices.

“The White Shield Master Plan is a work in progress but it’s a good feeling to have tribal dollars go to work and be placed in the ground for growth. Our grandchildren will see these things and these projects will be used forever. It’s money well worth spending,” concluded Councilman Fox.