MHA Nation Tribal Chairman Mark Fox and the Tribal Business Council are taking the COVID-19 pandemic very seriously and the MHA tribal leadership is one of the leading proponents in establishing policies that unite state and tribal communities in keeping the highly-contagious virus in check to protect the people. Now that an MHA Nation tribal resolution that requires a mask mandate on the Fort Berthold Reservation is in place, it behooves all to comply for their own safety, as well as abiding by the tribal resolution designed to protect the community. 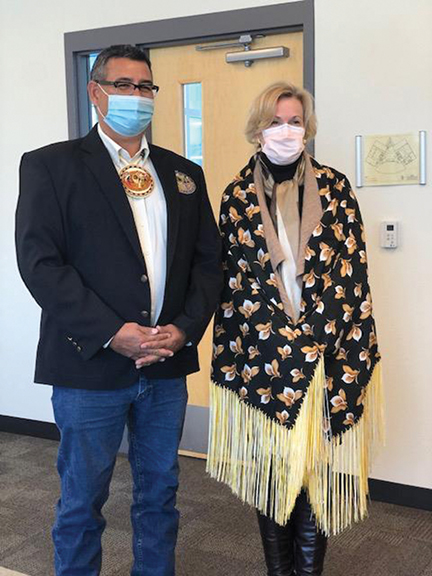 Due to the state of emergency declared on the reservation because of the pandemic, there has been a mask mandate for all tribal buildings for several months. Now the new mask mandate extends to all buildings and businesses open to the public on the reservation and it includes civil penalties for non-compliance. The tribal resolution is for both individuals and businesses to comply with the mandate. The resolution is relying on the businesses to enforce the mandate and safeguard their facilities and community. There will be compliance checks made and businesses can be fined up to $500 a day. Individuals will first be given a warning and then the fines begin at $50, but businesses that do not comply will be cited and fined after the first offense. Each time the individual or business does not comply, the fines increase.

COVID-19 cases are rising quickly across the nation and the winter months could bring more spikes and ‘hot spots’, especially across the Great Plains and Midwestern states. The current pandemic situation is already pushing hospitals to their limits. Across North Dakota, hospital and ICU beds are nearly at their full capacity in every city due to the recent upsurge in cases. The MHA Nation Tribal Business Council has now taken a major step in their own efforts to stop the spread of the virus with the passing of a mask mandate for the Three Affiliated Tribes in a tribal resolution that was made official on Friday, October 30, 2020. 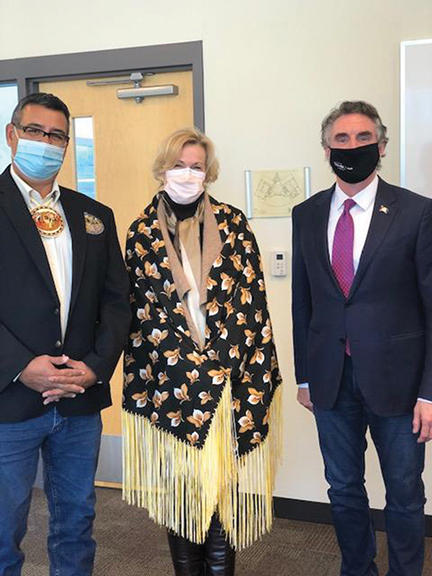 Chairman Fox had met recently with White House Coronavirus Response Coordinator Dr. Deborah Birx at the Bismarck State College Energy Center in Bismarck on Monday, Oct. 26 and the two were in agreement regarding mask mandates. Dr. Birx has been touring states all across the country to see conditions on the ground first-hand and how to help guide states to protect their citizens. Dr. Birx was blunt in her appraisal of North Dakota’s refusal to implement a mask mandate. She emphasized that North Dakota has the highest rate of new cases in the US per capita, according to the most recent CDC task force report.

“Over the last 24 hours, as we were here and we were in your grocery stores and in your restaurants, and frankly, even in your hotels, this is the least use of masks that we have seen…and we find that deeply unfortunate because you don’t know who’s infected and you don’t know if you’re infected yourself.” Dr. Birx was quoted as saying.

Dr. Birx had met with Governor Doug Burgum and other state and health officials prior to her meeting with Chairman Fox and other tribal leaders separately after the roundtable meeting. Chairman Fox and Dr. Birx agreed on the importance on the wearing of masks in fighting the pandemic. Although Dr. Birx was not able to convince the governor to implement a statewide mask mandate, the MHA Nation heeded the warnings and suggestions of Dr. Birx. Dr. Birx stressed the importance in implementing a mask wearing mandate statewide because of her observations in the city and the obvious lack of masks by people in the public.

Dr. Birx additionally recognized that tribal communities have many multi-generational homes where several people of different age groups live together and that indigenous people are family-oriented. She acknowledged that it is unfortunate that native children and elders are suffering greatly due to the pandemic and that Native American’s are more prone to having underlying conditions which makes them more vulnerable to the dangerous effects of the virus.

Three days before Dr. Birx came to Bismarck for the roundtable meeting with state and tribal officials, Chairman Fox sent a letter to Governor Doug Burgum “respectfully” demanding that he implement an immediate mask mandate. The MHA Chairman outlined various and important reasons in the letter for his concerns.

“Native people are uniquely and disproportionally impacted by the COVID-19 virus,” stated the letter to Governor Burgum. “The CDC found that the cumulative incidence of laboratory-confirmed COVID-19 cases among American Indians was nearly four times greater than that of non-Hispanic whites. The virus does not know or respect jurisdictional or political boundaries. Our interaction with the state community are daily and continuous. It is therefore essential that we have a unified approach to mitigation and containment.”

Chairman Fox has always stressed the importance of masks as a defense against the COVID-19 virus. One example he has mentioned is that the MHA Nation was the first tribe to reopen their casino after being the first to close due to the COVID-19 pandemic. But in the reopening of the Four Bears Casino and Lodge, that came with several strict protocols that include the wearing of masks by all employees and patrons. Chairman Fox is confident that those protocols such as wearing masks, keeping the machines clean and the monitoring of temperatures have kept the patrons and their families much safer and that the low overall number of positive cases within the first two months of re-opening the casino have proven that proper mitigation and masks can be very effective. Chairman Fox also mentioning at the meeting he attended that the virus is being brought into the tribal communities from the outside and that a statewide mask mandate should be implemented for the safety of all North Dakota citizens, both tribal and non-tribal. Adding that 60-70% of what our tribal members spend on shopping for basic necessities is off the reservation.

Chairman Fox holds the lives of the people sacred and is especially concerned for the elders and children who are more susceptible and vulnerable to the virus. After the meeting in Bismarck with Dr. Birx, Chairman Fox honored her with a traditional gift presenting her with a shawl on behalf of the MHA Nation. The gift was in appreciation for her support and guidance in battling the pandemic and understanding the unique cultural importance of native communities.