Scrutinizing a president’s right to self-pardon 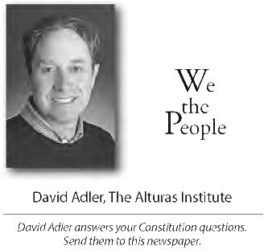 President Donald Trump’s declaration on June 4, 2020, that he has “the ab-solute right to pardon” him-self has drawn increased scrutiny in the closing days of the election campaign and the realization that his potential status as an ex-president would not protect him from criminal prosecution.
His thesis, never seriously contemplated by any of his predecessors and never litigated in American courts, raises constitutional questions. Beyond the immediate matter of the scope of the presidential pardon power and what the framers of the Constitution had in mind, Trump’s assertion would lay waste to two foundational principles of American Constitutionalism: no man may be judge of his own cause, and no person is above the law.
An election loss would leave Trump vulnerable to federal prosecution on various criminal law grounds, including tax, insurance and financial fraud, payment of hush money in violation of campaign finance strictures and obstruction of justice. In addition, civil suits await him and his business organization. Private citizen Donald Trump also faces criminal charges brought by the State of New York.
The pardon lause in Article II, Section 2 of the Constitution authorizes the president to grant pardons for “offenses against the United States,” but it does not extend to state charges. Thus, no matter how expansively Trump interprets the pardon power, he cannot derive protection from state prosecutors. If, however, the clause extends to self-par-dons, then Trump can insure himself against a boatload of grief from federal prosecutors.
The controversy surrounding Trump’s assertion provides a teaching moment both about the reading of constitution-al language and the relevance to constitutional interpretation of debates in the Constitutional Convention.
To be sure, President Trump continues to maintain that he has done nothing wrong, as either a legal or ethical matter, and therefore he does not need to pardon himself. But, if the need arises, he maintains the existence of an “absolute right” to pardon himself, partly because he believes that the president enjoys “unlimited” powers under Article II.
If Trump is correct in his assertion of “unlimited” powers, there was no reason for the framers of the Constitution to have enumerated specific powers such as the pardon authority. The fact that they did spell out specific powers rep-resents a rebuke to the assertion of “unlimited” authority.
Trump’s more specific claim about an “absolute” pardon power fails on additional grounds. His assertion that if the

framers had wanted to prohibit a presidential conferral of a self-pardoning authority, “they would have said so,” collides with the very nature of the written Constitution, which allocates powers in positive language. It is the scheme of enumeration of powers that distinguishes our Constitution.
For example, the president is authorized to “receive” ambassadors, and is charged with the duty to “faithfully execute the laws.” An argument by any president that the framers failed to prohibit the ways in which he conceptualizes the scope of presidential power would have required of the framers an impossibly broad imagination. The result would have been a Constitution running dozens of pages in length.
The sole textual exception to the pardon power, “except in cases of Impeachment,” affords Trump and his supporters some, but not much, room to claim that there are no barriers to the exercise of a self-pardon. That the pardon power is not unlimited is made clear by the framers’ de-bates in the Constitutional Convention.
George Mason of Virginia observed that a president might “screen from punishment those whom he had secret-ly instigated to commit” treason and “thereby prevent a discovery of his own guilt.” That nightmare, the subversion of the republic by pardons, led James Wilson of Pennsylvania to suggest that if the president were involved in such outrage, that he would be “impeached and prosecuted.”
Wilson’s rationale turned the tide. Assurance of the availability of the impeachment power as a remedy for the abuse of the pardon power demonstrated its limitations and instilled a measure of confidence in the grant of the pardoning authority to the president. The Supreme Court has also ruled that the exercise of the pardon power is subject to judicial review.
The lesson here is that the strictures on the presidential use of the pardon power to hide or “screen” accomplices in order to protect himself extends to the concept of a self-par-don. Otherwise, the president, in the words of Justice Joseph Story, might exercise the pardon power “to prevent a thorough investigation “ of his conduct. Such authority, to state it bluntly, would shred the fundamental principle of Anglo-American jurisprudence: no man is above the law. And, of course, it would eviscerate the foundational principle that no man may be judge of his own cause.
In short, the president may not determine his own fate by resort to the pardon power. Only one president in American history—Richard Nixon—has contemplated a self-pardon. Caught in the clutches of the crushing pressure of Water-gate, Nixon asked his attorney about the legality and advisability of pardoning himself. Despite his service to the president, Leonard Garment rejected the idea as “grotesque,” for it “would be saying to hell with the system, with justice itself.”
President Nixon never seriously entertained the idea of a self-pardon, but Trump dangles it before the American people.

Adler is president of The Alturas Institute, created to advance American Democracy through promotion of the Constitution, civic education, equal protection and gender equality.
Send your questions about the Constitution to this news-paper and he will attempt to answer them in subsequent columns.
This column is provided by the North Dakota Newspaper Association and Humanities ND.