Future Elite Search and Rescue Team Will Have Custom Rescue Boat, SHERP and Command Center for Rescue and Recovery 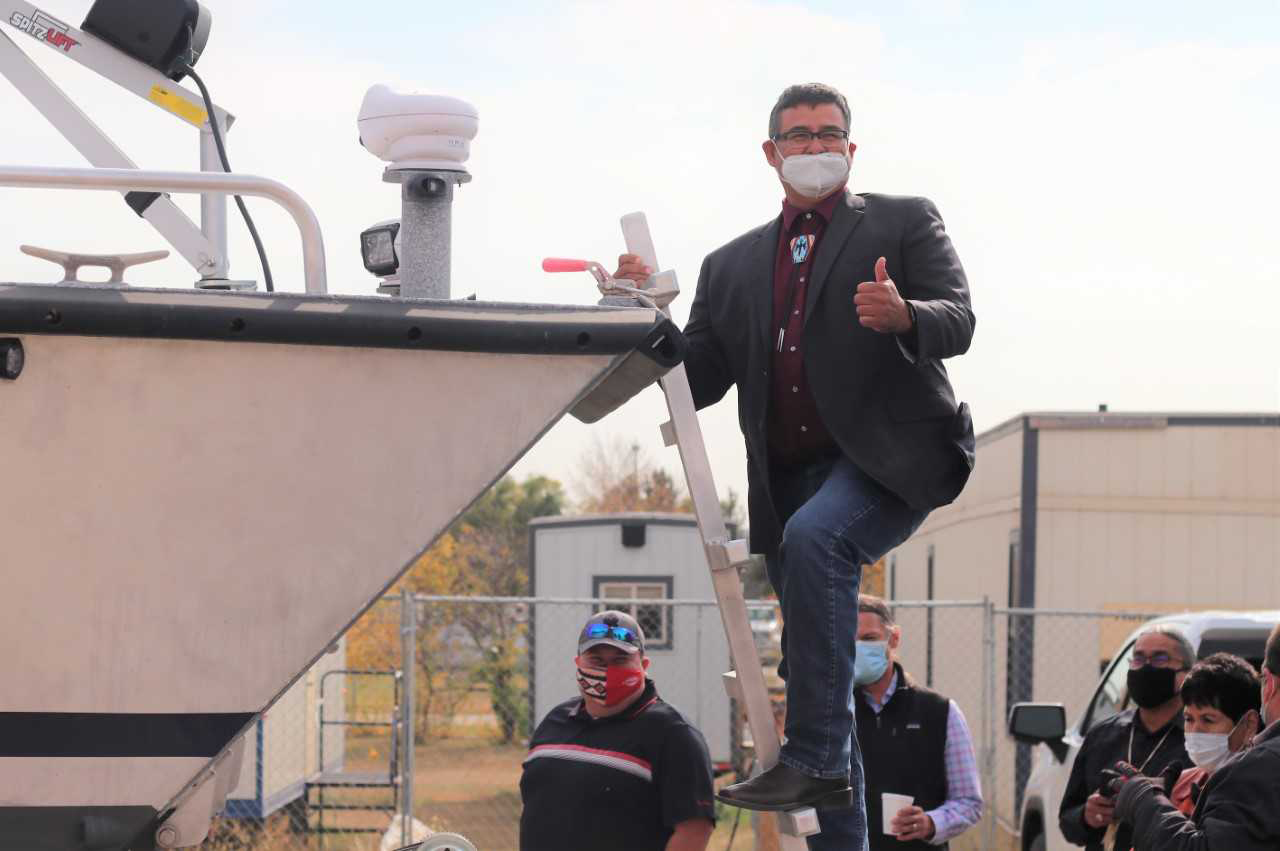 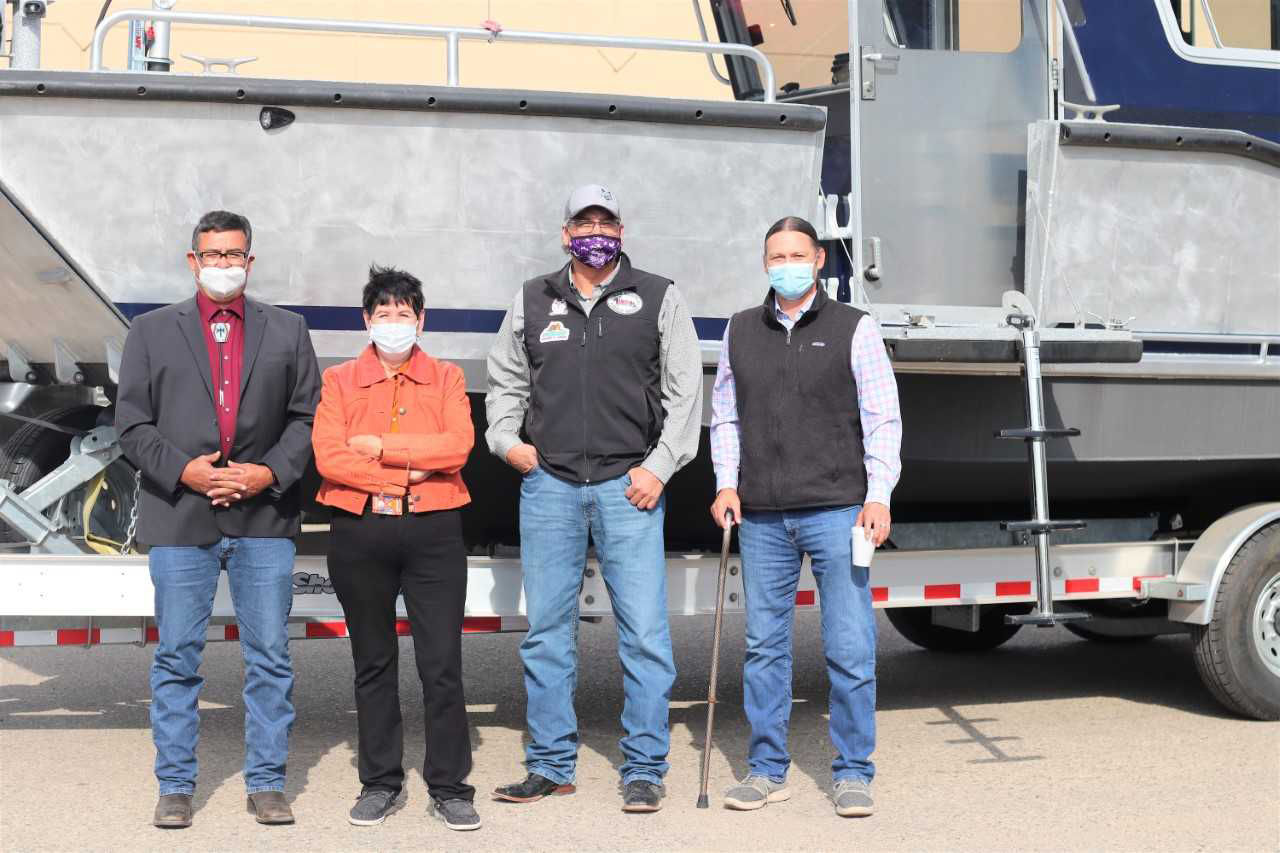 The waters of Lake Sakakawea and the ‘Mighty Missouri’ are beautiful and have provided much life-giving water and enjoyment for countless generations. However, there are dangers that lurk under all of that beauty. The number of mishaps and drownings over the centuries are many. The native ancestors who lived and thrived near the river acknowledged and respected the power of the Missouri River long before Lewis and Clark ever set foot in the area.

The Missouri River remains a wondrous life-giver, but at times it has taken a life. With the flooding of Elbowoods in the 1950s came the formation of Lake Sakakawea when the Garrison Dam was built. Lake Sakakawea is the largest body of water in North Dakota. There are thousands of recreational boaters and anglers who enjoy the popular lake fishing and boating every year in both cold and warm weather. MHA Tribal Chairman Mark Fox and tribal leaders are aware of the dangers of the river and lakes to people and MHA Nation now has a rescue vessel for any water emergency in any condition.

MHA Nation tribal leaders welcomed the new custom-built dive rescue water vessel recently outside tribal headquarters and were all impressed at the design and all of its capabilities. The rescue craft is a 26-foot landing craft that is specially-designed for any kind of water rescue in any weather condition. The vessel is built to handle any extreme condition on the water and last for many generations. Carefully constructed and custom-built over the span of a two-year period, the rescue craft was built after painstaking planning and teamwork towards the final completion. The vessel is hauled by another custom-designed piece of equipment that is necessary for the rescue craft to be effective to its full capacity; that being a F-550 Ford Dually pickup truck that has a massive cargo bay.  The cargo bay will seat up to five dive rescue team members and all of their equipment such as wetsuits and air tanks.

Chairman Fox has first-hand knowledge of the power of the Missouri River having swam the river seven times in special events to raise funds for cancer awareness.

“Given the amount of activity on the river and lake, this is a necessity,” said Chairman Fox. “Even more recently it is necessary with the MMIW and missing persons’ crisis, this craft is an important part of any crisis we may have here on MHA. When we do have any death or missing person on the lake, it is a very difficult thing for the families and community to deal with. With this rescue vessel, we will be much more effective searching and hopefully rescuing anyone in distress. In those seven consecutive years I swam the river, I gained extreme respect for that river that crosses our nation. There are a lot of undercurrents that can pull you under and since it’s a relatively new lake in North America, there are also many tree trunks and other objects in the lake that also pose a danger. As much enjoyment that it gives us, it can pose a real danger and we ask all to enjoy it responsibly. We encourage tourism and people to come and visit our lake and many other attractions. But now we have a rescue craft that can deal with the worst-case scenarios.”

The Lake Assault rescue vessel now owned by MHA Nation is versatile and powerful. The vessel is powered through the water by twin 250 horsepower Yamaha fuel-injected motors and boasts many high-tech features in the lighting, within the water-tight cabin and in the Ford F-550 that hauls it to any future water emergency. The forward-looking infrared and heat-detection equipment in both the rescue boat and truck can detect persons from a very long distance. The diesel fuel tanks in the rescue landing water craft can hold 107 gallons and can essentially be on the water for up to a few days without refueling. The design team emphasized to our tribal leaders that the craft and truck have both passed all of several rigorous testing. The craft has been out on Lake Sakakawea cruising at top speeds of 50 knots (60mph) and the handling was extraordinary.

The MHA Nation tribal leadership also realizes that operating the rescue boat, truck and the communications, observation and surveillance systems require highly-trained and dedicated personnel and are currently seeking individuals to be part of an elite search and rescue team. Potential divers, rescue landing craft and truck operators along with other water rescue team members should be prepared for a rigorous training program. The search and rescue team and future dive rescue facility will serve to enhance the already highly-dedicated first responders that are skilled in rescue operations on MHA Nation.

The search and rescue landing craft and dive rescue facility project is being spearheaded by Northeast Segment Councilman Mervin Packineau. The funds for the custom-built rescue craft and truck had been allocated long before the project began about three years ago. After the rescue craft was completed, it was tested several times on Lake Superior near the manufacturer of the craft, Lake Assault Boats LLC of Wisconsin. The mission-specific company began its elite work in a U.S. Navy shipyard. The Ford F-550 pickup truck and the cargo box was also custom-built and designed. The F-550 is also filled with high-tech equipment and a communications system. The TRICLOBS integrated night vision surveillance and observation system in the two units was built by a company that specializes in Tri-Band equipment from Bellingham, Washington.

“I saw the need long ago that we needed a search and rescue team to enhance our law enforcement and other first responders and the rescue diving boat that it takes for rescue or recovery,” stated Councilman Packineau. “I recall when Councilman Scott Eagle drowned and we couldn’t find him for a couple of days. The reason we’re building the (dive rescue facility) at ‘The Point’ there at Four Bears is because it’s the busiest place and we can also be close to the helicopter pad that will be installed and built at the point. We will have someone 24/7 at the facility and anyone who is interested in training for the search and rescue team can contact Bandy Poitra at the Northeast Segment office.”

Councilman Packineau added that in an emergency, time is critical and having a rescue craft ready for deployment at a moment’s notice is a true life-saver. There will no longer be a need to wait for outside agencies to meet any emergency on Lake Sakakawea.

The MHA Nation will soon see the delivery of another type of rescue vehicle. The arrival of the SHERP is anticipated by the tribal leaders and emergency management officials. The SHERP is an amphibious all-terrain rescue vehicle that is built in Ukraine. It is known across the world for saving lives in extreme conditions and terrains, both on land and water. More specific information on that amphibious vehicle will soon be provided and shared when the unit arrives at the MHA Nation. 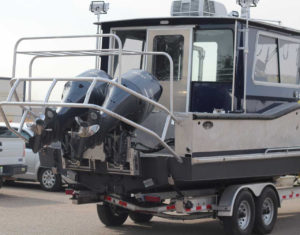