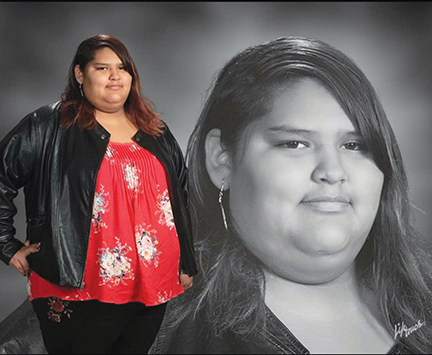 Elvia “Rose” Ramirez (“Red Shield Woman”) was born to Susan Three Irons and Elias Ramirez. She is the 3rd oldest of 9 children. Elvia loved to be mom’s helper, always watching over her younger siblings. She made some “darned good chili” for family gatherings. She always asked how you were doing and had such a passionate soul. When she saw me (Auntie Billie (Garcia) Walks), she always asked about her favorite uncle, Gar Walks.

She enjoyed family gatherings at grandma Marilyn and grandpa Valerian’s house where she loved to play games, visit, and gather for holidays, birthdays or just to spend time together. Elvia liked to make tik tok videos and she liked calling to talk with her cousin, Ashley.

Family was important for Elvia and she made great efforts to keep in contact with her other siblings in Arizona, especially her little sister, Robin. Elvia was a Bird Dancer. A couple of years ago, the Bird Dancers were invited up to the Little Shell Powwow. Elvia was excited and went out and danced with them as she followed her native ways from both Salt River Pima Mericopa, in Arizona and the Three Affiliated Tribes. These dances were taught to her by her maternal grandparents, Marilyn and Valerian Three Irons, of New Town ND, and also by her paternal grandparents, Anette and Lynwood Vest of Mesa Arizona.

Her funeral ceremony will be held next Friday Oct 16th  in Arizona and she will be buried the following Wednesday.

Elvia loved to help everyone. She was always willing to listen whenever we needed someone to talk to. She loved to do tiktok. She was excited about her senior year at Parshall High School. She was already making plans for life after graduation.

Elvia has been with her boyfriend Gabe Juarez for 4 years. They met at school in 9th grade. They did everything together and enjoyed life together and wanted to get married after graduation.

She wanted to take her little siblings on a road trip to California to visit Disneyland and introduce her boyfriend, Gabe to the rest of her family in Arizona.

She loved taking care of her cats. They were the only children she was interested in ever having. She was a big help around the house and with her little siblings. She made sure they did homework and once they started ‘Distance Learning’, she helped them login to class and monitored her little brothers to make sure they actually stayed logged in. She would always like to joke with me, reminding me that I am ‘the adult’.

Elvia never knew what she meant to so many people and how much we loved her. She was not only my daughter, but someone I also could talk to and laugh with, about most of the crazy things going on.

She is one of a kind. She had a great big heart and love for everyone she had ever met.