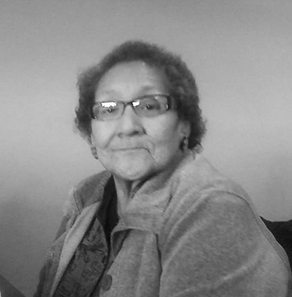 June Francia Lockwood was born on June 30, 1940 to Eleanor “Happy” Red Fox and James Conklin in Elbowoods, ND. June was a resident of a nursing home in Minot, ND when she was called home on September 23, 2020. June was an enrolled member of the Three Affiliated Tribes and a child of the Prairie Chicken Clan.

June or “June Bugg” as she was called, spent most of her life in New Town, ND. Many knew her as Pastor June Lockwood of the Church of God Indian Mission. During her younger years she lived in various places like El Monte, CA and Phoenix, AZ. In Phoenix, June and her younger sister Janice worked together at a nursing home. The pair always traveled together; you would not see one without the other. June and Janice enjoyed attending church revivals and camp meetings together. June’s siblings had a special place in her heart, and she loved them dearly.

As the eldest, June had part in raising her younger siblings, she also helped raise many of her nieces and nephews. She had a large part in raising her two nieces Desiree Conklin and June Yellow Lodge. While living in Arizona she gave birth to her only son Frank, whom she loved dearly.

In 1980 June met her soulmate Lawrence Lockwood, they married on March 21st, 1981. Together June and Larry traveled to many different states to preach and share the word of God. In the late 80s when the water wasn’t working at the church, she held church services in the basement of her big blue house in the village. In 1984 she adopted Marcell “Tiger” Antonio and she raised him as her own son. She grew a special bond with him throughout his life and would care and always check on him whether he was in ND or AZ. In 1990 June received her GED at Fort Berthold Community College, she than began her journey Ministering full-time at the Church of God Indian Mission. After the passing of her daughter in law Joyce, June took on the mother role for her two granddaughters Heather and Michelle.

The two were her pride and joy, she loved teaching them the word of God, the power of prayer and would always bring them to church with her. June would sit up most of her nights with her granddaughters and loved to joke around and play with them while watching her Golden Girls on TV. June was determined to be the best mom for them, and she was, if she was not on the road for church, she was home with her girls. June was extremely proud of her Granddaughters, she was Michelle’s #1 fan, she never missed any of her sports activities. June always called Heather her “baby” an held a very close relationship with her. In 1998 she was blessed with her youngest granddaughter Franki who June thought the world of and spoiled her to pieces.

Over the many years of ministering and traveling she adopted many sons and daughters along the way. She stood firmly on God’s word and brought joy and love to everyone around her. June had a big caring heart for anyone she crossed paths with and would always having a help hand to anyone in need. She will be deeply by everyone, near and far.

Her wake was held Sunday, September 27, 2020 at Northern Lights Wellness Center, New Town with her funeral on Monday morning.  She was interred at Snowbird Cemetery, rural New Town.