Walk to Save Our Women and Children

New Town, ND – 2020 has brought challenges to the nation’s communities, including the many challenges brought onto MHA Tribal members who live on and off of the Fort Berthold Indian Reservation. However, the issue which hits the hardest and is understandably held most ‘near and dear’ to the hearts of the people, is the risk of any harm done to the most valued and vulnerable community members, THE CHILDEN. 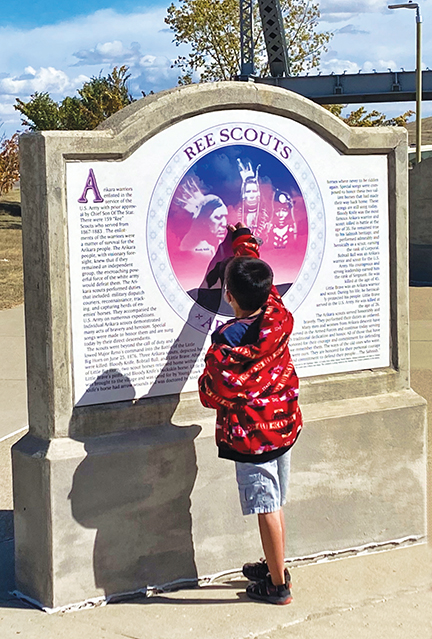 KMHA Employees, Jacqueline Hayward, Finance Officer, and Anne Morsette, Station Manager, organized a Save the Children walk to raise awareness of the everyday risks our children face such as abduction, exploitation, and murder.

The Messages on the Signs

A bridge walk on Saturday afternoon addressed these risks and was geared toward bringing its awareness to those community members who drove by and honked at the bright signs reflecting “Save Our Children,” “Keep Our Children Safe,” and “See Something, Say Something.”

Morsette captured the event on Facebook Live and said, “Even in North Dakota, it’s scary, and I don’t think it is talked about enough. We have to be aware, stay vigilant, educate people, and let them know it could happen to you. As a mother and a woman, I do not know how many times I have felt unsafe getting out of my car at a gas station late at night. I should not feel this way, but that’s the way it is nowadays, and being the mother of a daughter, I have to think about this for her.”

The walk also focused on the group, Missing and Murdered Indigenous Women (MMIW), as the appeal to law enforcement is virtually the same, to treat each missing person case as a dangerous abduction directly from the time of reporting. 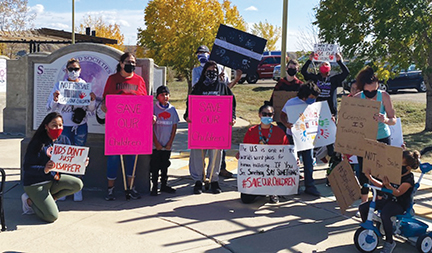 Morsette added, “You almost have to be blue-eyed and blonde-haired to get a proper police response. They just don’t take it seriously, and it’s a big problem. There is a drug problem on the reservation, as there is everywhere and in every community across the nation, but these children who are sometimes sold by their mothers for drugs need to be found immediately when a relative calls the police and says they are concerned. We don’t need the FBI just to treat it as a ‘Rez issue’ and discount our missing women and children because they think it is just our problem. It is the entire nation’s problem, and they need to look at it this way.

There has been an overwhelming call from victims’ families in recent years to hold police and national law enforcement officials responsible for dedicating more time and resources toward finding women and children who have been reported missing. The group is called Missing and Murdered Indigenous Women (MMIW), and lately, other acronyms such as ‘G’ for “Girls” and ‘R’ for “Relatives” (also men) have been added when appropriate.

Founded by non-political activists who noted a significant disparity between native and non-native missing women and children, “In the United States, Native American women are more than twice as likely to experience violence than any other demographic. One in three Native women is sexually assaulted during her life, and 67% of these assaults are perpetrated by non-Natives.” NCAI Policy Research Center. 2013. Lisa Brunner, executive director of Sacred Spirits First National Coalition, states, “What’s happened through US Federal law and policy have they created lands of impunity where this is like a playground for serial rapists, batterers, killers, whoever and our children aren’t protected at all.”

The missing and murdered Indigenous women (MMIW) epidemic affects Indigenous peoples in Canada and the United States, including the First Nations, Inuit, Métis (FNIM), and Native American communities. It has been described as a (Canadian and now, American) national crisis and an [G]enocide. Reclaiming Power and Place: The Final Report of the National Inquiry into Missing and Murdered Indigenous Women and Girls: 1a. p. 728. CP32-163/2-1-2019, https://en.wikipedia.org/wiki/Missing_and_murdered_Indigenous_women.

Every Report Should be Taken Seriously

Morsette feels strongly about the need to get people to pay attention and further explained, “Every report should be taken seriously and not having our law enforcement say, “Oh they’re just a runaway, it hasn’t been 72 hours yet,” because parents know their children, they know their habits, and for instance, if they haven’t been active online for a while, they know that child is missing.”

Every Rescue is a Success

She further went on, “Whether law enforcement finds out the child has been trafficked or not, it is still a success. It is not a waste of resources if the woman or child is found safe and is not abducted. We have to stop looking at it like this. We still want those runaways found immediately so we can eliminate the potential risk of further harm or, worse, death.

The event began at 2 pm on September 26th at the ‘Monuments’ or ‘west side’ of the Four Bears Memorial Bridge, proceeded east, across Lake Sakakawea, and back to its original starting point. Jacqueline Hayward is also the original creator of a group called ‘Mommin’ in Montreal.’

For further questions about how you can prevent these crimes from happening in your community, North Dakota Human Trafficking Task Force’s hotline number is 1.888.373.7888. 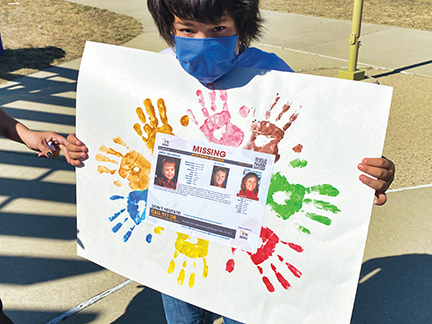 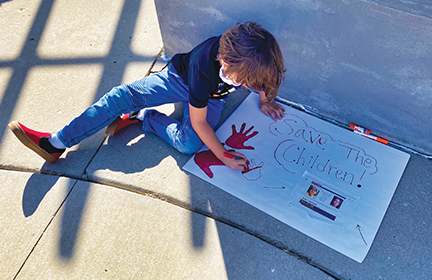 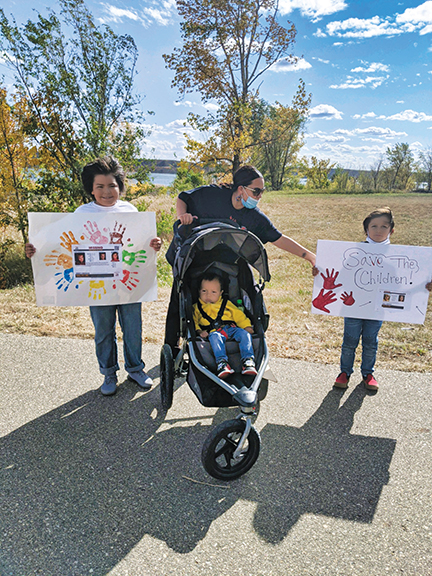 Shelbe Bearstail and her sons walked. 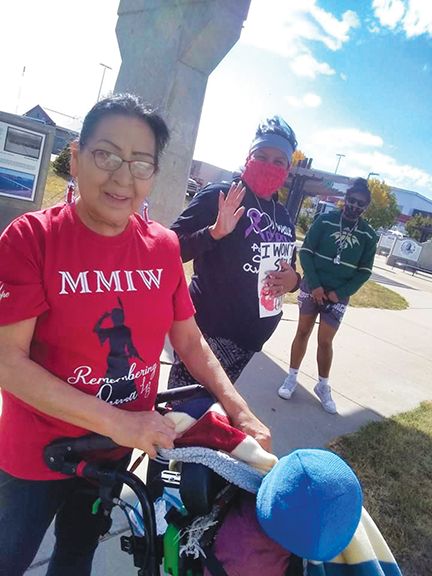 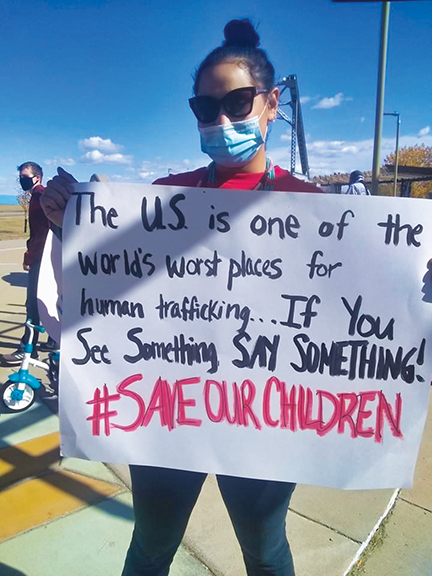 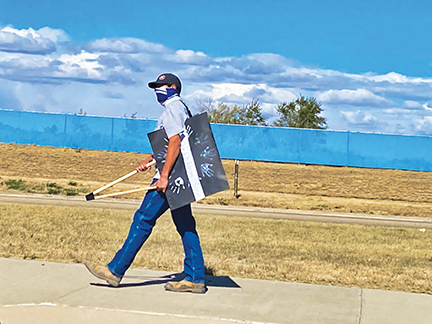 Ronnie Mann walked with his family 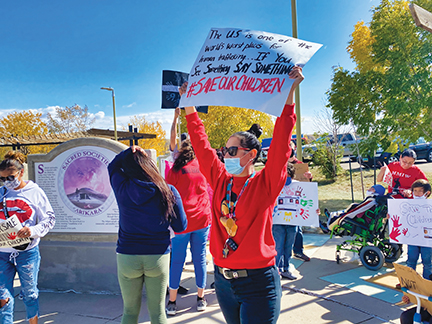 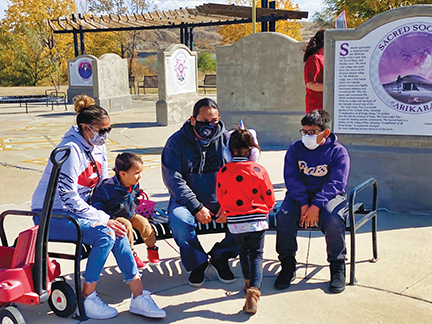 I organized these events because bringing awareness to child trafficking and exploitation means a lot to me. Children do not have to be missing in order to be exploited. It can be happening to children you know. We walk for the missing children, we walk for the children being exploited and needing someone to tell, we walk for all of the children that need us to rise up and say that child exploitation and trafficking is not okay. We will not stop bringing awareness until the exploitation stops. We are also raising funds for two amazing and worthy organizations- Operation Underground Railroad and The National Indian Women’s Resource Center.”

Founder of ‘Mommin’ in Mountrail’