THROUGH THE EYES OF THE ELECTION BOARD MEMBERS 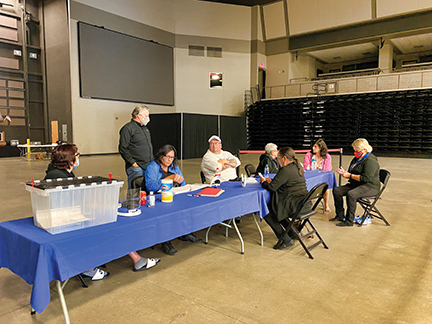 *Editor’s note: This is an extended story due to the importance of the article’s information regarding our local election processes.

New Town, ND – Always well-anticipated, the MHA Nation’s election process for the Business Council seat in three of its corresponding Tribal Segments is a long and arduous one.

Every two years, the Election Board Committee members come together and start working hard, six days a week. For three months, every two years, their lives become consumed with the MHA’s Tribal Elections Ordinance Manual.

This year, White Shield, Mandaree, and New Town/Little Shell Segments were all in the running to elect a Representative to sit on MHA Nation’s Business Council. Dr. Monica Mayer took New Town by over 50% of the vote, becoming a ‘shoe-in,’ thus preventing her from continuing on to the general elections, which are set to be held on November 3rd. Fred Fox and Gary Dickens, the top two candidates in the White Shield Segment, will continue on, as also will, West Segment’s opposing candidates, Gladys Sherry Turner-Lone Fight, and Lloyd Vigen, both of Manderee.

“We take our hats off to the committee members of each segment as they are actually the front lines” – Jay Standish, Election Board Member, 2020

There was an adjustment in the election process due to COVID-19; sufferers of the virus are entitled to vote, and so the committee members in White Shield and Parshall met those who were sick or suffering from COVID-19 curbside while the committee members donned hazmat suits. This was in order to provide a safe exchange while members verified temperatures, face-coverings, voters’ identification, residency requirements, and collected election ballots.

In reference to MHA Nation’s quick and careful response to making sure each member got their chance to vote, Cheryle Good Bird reported, “We are the Board, and we select the committee members. The committees go out there, and they are really the ones who are putting their lives in jeopardy. The biggest difference would be the struggle in the set-up and trying to keep people safe. With this Coronavirus, there’s a lot more work involved; even though there is COVID-19 going on, this is the first time we accommodated those who have COVID-19. We did a curbside for voters, and it was scary – especially when there was an outbreak in White Shield. We were trying to keep our committee safe because everyone has a right to vote according to the ordinance, as long as they are on the reservation.”

Camilla Thornton-Gosnell (Four Bears) (in regards to this year’s practice), “I think it’s a very secure system and it is very intense, and because of [the committee’s response] to COVID-19, it was very innovative, and I am glad that I am working with people that have been on this Board for a while. I’m glad that the curbside voting [for COVID sufferers] really helped with the voting process.

The Process: Candidate Screening, Equal Application and Treatment of Each Candidate, and the Ordinance Manual

One of the initial processes requires the board to verify every candidate is in good standing with each of the 22 MHA Tribal Entities. The candidate cannot be in debt collections or any other discrepancy which would conflict with their term and seat as that elected official. “We started August 14th when we received a list of the candidates, and we began prepping their files,” Jay Standish explained, “The files contain whatever paperwork we have on the candidate already. Then we start running around getting copies of releases for information. We have to screen all of those departments that are listed as ‘Tribal Entities.’ Each department is given a timeline of when we need the information for each candidate. When that timeline is met, we have 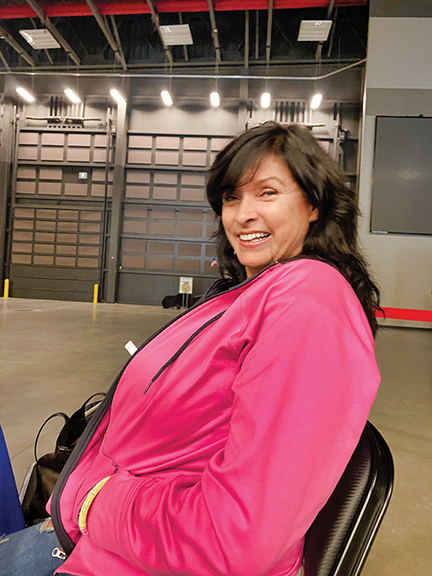 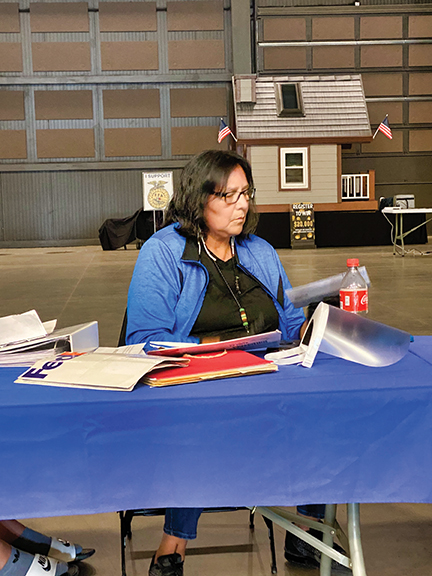 to go back and pick up those files and make sure we have them completed. Everything we do, we do as a team, as a ‘Board’; it’s not just one person making a decision. We all sit down; all seven of us. We come to an agreement, then we go through a file, and when a candidate has a discrepancy, we start sending out certified letters, which gives them three days to get it taken care of. If they meet the timeline, they are good to go.”

“On top of that,” he further offered, “we start getting calls on absentee voters. So, we have to get that paperwork ready and send out those to the voters.”

Part of the stress would be the time constraints and the need to watch deadlines; Standish further offered, “Everything has a time to it. You have a certain amount of days, and you have a certain amount of time in which to do everything, and our ordinance even touches on a lot of that, you know? Okay, you’ve got till 5 o’clock, it’s in there; you’re always on a time-crunch.”

It Can be Stressful, but we Just Want People to Know the Ordinance Requirements Beforehand Because we are Going to Follow it to a ‘T’

The board members mentioned the word “ordinance” at least 30 times during the interview whereby, Standish stated, “The ordinance specifies how many days you have to complete a task. It even goes down to the hour within that day. Saturdays are included as a business day for us. So, we are working six days out of the week. It is a very deadline-driven job.”

He further offered, “It’s got its days (election board duties). It can be stressful. There are sometimes when you try to go home and relax and you just can’t because everyone on the Board has things running around on their mind with all these people questioning the ordinance. It’s a lot of pressure so, even though you go home to relax, you can’t because you’re too busy focusing on the job here. You have all of these deadlines.”

There is one thing that makes it easy, you know? You’ve got Cheryle, and she has been here for many years. Especially since it comes to Cheryle because she’s had so much experience, she is our go-to person. She’s our clerk, and she knows the ins and outs. Sometimes we might take a sidestep this way, and she says, “Hey, hey, hey…”

According to Good Bird, “This my thirteenth election. The percentage of voter turn-out changes every two years. For instance, this year, the elections were held for three segments; White shield, Four Bears, and Mandaree. The voter turn-out is good, but in years where the Chairman‘s Office and the other two segments, Twin Buttes and Parshall’s office seats are up for election, that’s when it gets hectic with the voter turn-out. It also depends on which Segment is running, like for White Shield, they have six running candidates this year, and that’s a lot. For every Segment, it’s every four years, but we alternate between three segments for one election, and two years later, the Chairman and two other segments, Parshall and Twin Buttes. So in two years when Twin Buttes, Parshall and the Chairman run that’s when it’s really going to be hectic.”

This Ordinance is our Bible we go by Everyday

“Other reservations don’t look at requirements of candidates the way that we do,” Standish offered, “If they want to run, they let anyone run. But our Tribe is very strict and not just letting anybody in, so there are guidelines that you have to follow to be able to be in to be capable of running. That is one thing that our Tribe does is look at who’s going to be running. If they are going to be a leader, there’s things they need to look into before they decide to run. It is the ordinance we go by. It’s right there in black and white.

The Ordinance is the basic platform which the board members operate from for three months while they work the elections:

Cheryle Good Bird offered, “Something I really want to point out is this election board is placed here by the Tribe Councilman and the Chairman, and we are put in here to go by this ordinance.

A lot of people think we are mean, and after the elections, there is a lot of people who won’t talk to us. People think we are purposefully trying to keep them off the list of candidates, but we are not. We are going by the ordinance. If you’re going to run (for office), prepare yourself, you know? You’re not going to come in here and just think you’re going to get in because there’s a list of things that we have to go through with each candidate, and it’s not the election board’s fault if they don’t get in. The ordinance is our Bible that we go by every day.”

Noreen Two Crow asked to straighten a few things out, “When I chose to take this position on the election board, I knew what I was getting into. I thought, “Oh, I can handle it. I’ve been criticized before. I can deal with it. People are going to say what they want; we have no control over that.”

Two Crow has worked on the Board since her appointment by Parshall’s Chairman (North East Segment) and has continued to offer her service to her community by sitting with the other board members, “Another thing I think people need to see, is we are not here to hide anything; we are here to do a service to our communities to our segments. People don’t realize how stressful it is. They don’t appreciate it. We want to be treated with consideration and respect. We would like the candidates to treat us this way; but instead, we are not appreciated and, we are cut down for it, and that’s okay; because we are getting the job done. Another thing I see is people running as candidates say they did not get an ordinance, and we just want them to ask for one. Hopefully, other people who will run for office in the future will get their ordinance first, and they will know what to do.”

A copy of the ordinance is available to anyone who would like to receive one. Please contact the MHA Tax Office and request an ordinance from the Election Committee at any time.

Realizing the stringent timeframes for notification by certified mailings given to each candidate by the action of the ordinance, the Board met a few years ago and voted to allow for courtesy phone calls. The Board will call the candidate to inform them their particular certified notification is on its way to them; however, this is not a requirement by or of the Board and is a simple courtesy to the candidates.

Election Board Members are appointed by Council Members, and their aptitudes, experience, honestly, and ability to work under high pressures are all strong considerations for their hire.

On Tuesday, September 27th, the Election Board Committee met at the polling site at the 4 Bears Casino and Lodge, where they conducted a ballot count. Our KMHA staff member, Will Mcguire, was present and interviewed the election board members as they counted votes on three of the seats available for the MHA Nation’s Business Council. McGuire posted results to KMHA 91.3 FM’s Facebook page and kept the viewers updated with election results at that time.

McGuire submitted parts of interviews and most photos. 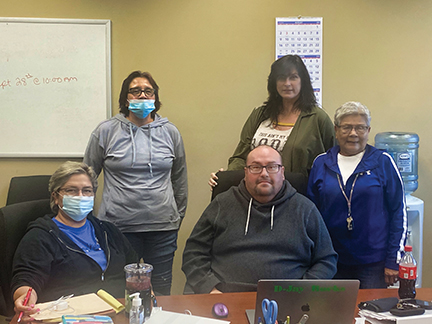