New Town, ND- Gabriel Romo has been standing by the Four Bears Bridge, holding a sign that says, “Lenard Peltier is innocent.” Romo has been in the New Town area for approximately a week, hoping people who drive by will check into the plight of Lenard Peltier. He initially learned about Peltier when he moved to North Dakota in 2014 to work in the Bakken oil field. He was spending his downtime building a go-kart race track in Dickinson when he heard about the 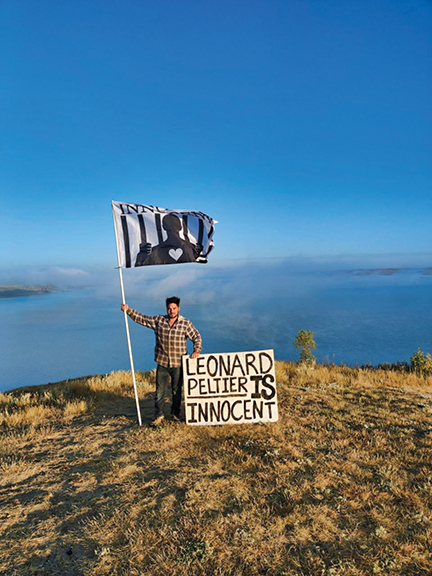 injustices done to Mr. Peltier. Once the oil prices dipped, and his job was shut down due also in part to the COVID19 virus, he left for his home state of Wisconsin but then promptly turned around and headed back to North Dakota in order to further Peltier’s cause stating, “I just felt like I had to do something.”

Romo has expressed concerns that he believes the younger generation does not know much about Lenard Peltier. Peltier was a Native American Activist for Native American rights and was also part of the American Indian Movement (AIM). Peltier was convicted of a felony for the murder of two FBI Agents in the Pine Ridge Reservation. There have been many conflicting stories about the nature of his conviction.P eltier has been in prison since 1977, becoming one of the longest-serving political prisoners.

“I see Lenard Peltier as a political prisoner who has not received a fair trial, and when he finally does, he will be set free,” Romo said. He stands along the highway in New Town, holding up his sign and an American flag. He has received many supporters along the way. He has also set up a website link on innocentflag.com for people to learn more about his movement. He hopes to bring awareness to the younger generation and the rest of America of Lenard Peltier and the ever-present flaws in the U.S. justice system. He urges people to make flags and put them in front of their homes to show support for Lenard Peltier to represent he is not forgotten or alone.