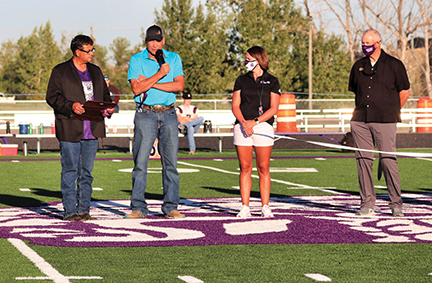 As the sun was going down in the west, one of the most historic events in Parshall took place September 4th, Friday evening. With the ribbon cutting and official opening of the new Randy Hedberg Field and Parshall High School Sports Complex, a new era on the horizon of Parshall Braves sports is eagerly anticipated.

A proud Hedberg cut the ribbon that memorable evening while being flanked by fellow Braves alumni and former Parshall athletes, Northeast Segment Councilman Mervin Packineau and Tribal Chairman Mark Fox. The moment was preceded by many words of tribute and gratitude from both Chairman Fox and Councilman Packineau. Hedberg had his time to speak and like all the others in attendance at the ceremony and football game that followed, Hedberg marveled at the new facility and how much excitement and pride it will help bring to the future of the sports teams of Parshall.

“I’m impressed at all the progress and work that Mervin (Packineau) and Mark (Fox) have completed on the reservation and this field and sports complex is one great example,” said Hedberg after the ceremony. “I remember one game when I was playing for the Braves in high school and we were playing out at the old football field that used to be out by the golf course south of town. I saw a man wide open way downfield and I thought I had a long touchdown. I let the ball go and I hit a highline wire. So no touchdown there. We never have to worry about that happening with this great facility now.”

Hedberg had the field named after him years ago because of his football prowess and the success he continued to achieve after he graduated from Parshall in 1973.  The former Parshall Brave was given the honor to cut the ribbon for his contributions to Parshall as a high school player and the recognition he brought to the community through his college career as a quarterback for the Minot State University Beavers and then afterwards as the starting quarterback for the NFL professional team, the Tampa Bay Buccaneers. Hedberg remembers many great moments of his NFL career that were of the positive nature. However, he noted that one of the most memorable ones came when he was unfortunately sacked by the great Allan Page of the Minnesota Vikings where Hedberg suffered a concussion. Hedberg retired from the NFL to go on to be head coach at St. Cloud State for 9 years and after he left St. Cloud State, he helped build the NDSU football program to what it is today. Hedberg is also in the MSU Beavers Hall of Fame.

Councilman Packineau hopes that the new field and sports complex that includes a state-of-the-art track will spark more interest among the community and student/athletes. He is grateful for the support he has received from the MHA tribal business council.

“In both the new school and sports complex projects, I’m just happy that the Tribal Council is able to help the youth in this capacity,” said Councilman Packineau. “In time the entire community will fully realize just how nice that field and complex is once they come out there and watch some games.  I also believe in anything that inspires students to stay in school and graduate because they are proud of their school. If we can inspire students in any way, then that we will have done what we want to do.”

During the opening ceremony, Chairman Fox emphasized how much positive inspiration that Hedberg has created for the school in terms of a Parshall Schools athlete advancing on and making his mark in both collegiate and professional sports. Chairman Fox is proud of every athlete who has ever donned a Braves uniform and is grateful for the teamwork between the MHA Nation and Parshall School that led to such a high-quality sports complex for those athletes.

Hedberg was born and raised in Parshall and is proud of his small town roots and that he was given such an honor and that such an incredible football field is named for him. The old football field was also Randy Hedberg and he still cherishes that initial honoring. 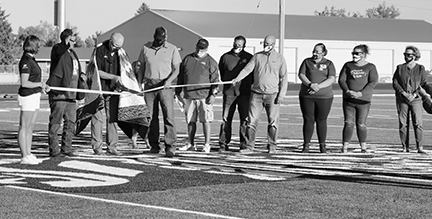