Honoring a Hero of the MHA Nation

It was a good day to honor a warrior. The blue skies and warm weather on Saturday was a blessing and the spirit of Corporal Nathan Goodiron was strong at the ceremony that honored him as the hero that he is.

The Mandaree man who gave his life in defense of the land he grew up on as a young boy, in the prairies, rolling hills and rivers that surrounds his homelands, was remembered by many family and dignitaries that morning in a good 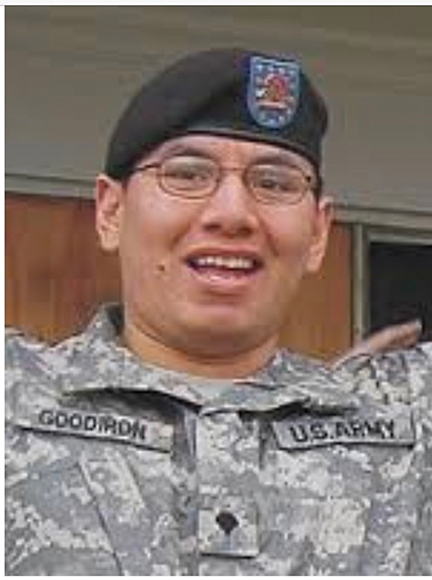 Corporal Goodiron was killed in action in Afghanistan after an attack on his convoy on November 3rd, 2006. Goodiron was killed while on duty with the North Dakota National Guard’s Grand Forks-based 1st Battalion, 188th Air Defense Artillery Regiment. One of the highlights was the unveiling of a Soldiers Cross bronze statue with a plaque with Cpl. Goodiron at its base.

Many dignitaries, family members, and fellow soldiers who served in the same unit as Cpl. Goodiron had a chance to speak and each word was touching and from their hearts. Goodiron was respected for the brave man he was, but he was also remembered for his great sense of humor. Chairman Mark N. Fox, U.S. Senator Kevin Cramer, former U.S. Senator Heidi Heitkamp, Major General Alan Dohrmann were four of the dignitaries who shared powerful words of respect for Cpl. Goodiron. Chairman Fox emphasized that amazing strength comes from being part of a good family as the one that Nathan Goodiron was raised in.

“Nathan’s family has always been very traditional and they have upheld our cultural values for a very long time,” stated Chairman Fox. “Those values revolve around Nathan’s grandmother Lyda (Black Bear) Bearstail and his mother Harriet. Lyda has committed to the community through the building of her church and as families go, the Goodiron family is providing help in many ways. The sacrifice that Nathan made is an example of his personal commitment. Why a young man would put himself boldly forward and take those steps to provide protection for his land and country comes from being raised right.”

Chairman Fox also stated that the MHA Nation is known far across the nation in the way they honor their veterans and the ones who have passed on. A U.S. Marine veteran, Fox noted that the Goodirons will always be given the utmost respect and support from him and the MHA Nation as they live each day without their loved one.

Other speakers were Cory Goodiron and the younger brother of Cpl. Goodiron. His younger brother recalled how his older sibling always made people laugh and the humorous spirit that Nathan carried with him into the battlefield.

Robert Fugere, the commander of Cpl. Goodiron’s unit, recalled being in training with him and how Fugere was trying to make the top score in running. As he ran towards the finish line, Nathan Goodiron passed him up, running backwards with a cigarette in his mouth. That was an example of Goodiron’s sense of humor – even to his commander and, of course, his extraordinary fitness level.  Fugere is now a Colonel in the North Dakota National Guard. Phil Wieser was a platoon brother who served in Afghanistan with Goodiron. Weiser also recalled how Goodiron maintained his unique personality to keep his fellow soldiers relaxed and together in unity.

Cpl. Goodiron’s mother, Harriet Goodiron, was the last of several speakers and she thanked each one of them for taking their time to pay such a wonderful tribute to her son.

“It makes it easier for me when my fellow Gold Star mothers are present because they understand what it is to lose a child to war on the battlefield. When you lose a child, it is hard but in our case, our children were wearing the military uniform when they died. That helmet, rifle and combat boots on the statue were what our sons were wearing when they died. That statue will stand for time immemorial and the fact that Nathan will have a place here at the Three Affiliated Tribes Museum Veterans Memorial Park is special. and to they’ve been the ones that’s been behind our family,” stated Harriet Goodiron.

Goodiron is the 10th soldier to be recognized out of 22 North Dakotans who have given their lives in battle.

U.S. Senator Kevin Cramer said he’s proud of what Sand and the foundation has done in honoring the fallen soldiers of North Dakota in Iraq and Afghanistan.

At one point, Sen. Cramer spoke directly to the Goodiron family. One statement was to Cpl. Goodiron’s mother, Harriet Goodiron, since he was aware that her late husband and Nathan Goodiron’s father served two tours in Vietnam. Paul Goodiron passed away as he was traveling across the country trying to keep the memory of his son alive by attending veteran’s events from coast to coast. For years, Paul Goodiron was a very proud father who was mourning the loss of his son in the best way he could.

“Harriet, you married into a family of warriors and then you produced a warrior yourself in Nathan,” Senator Cramer stated.

Also present at the ceremony were the North Dakota Patriot Guard, who ride motorcycles to events that honor veterans. The Goodiron family was appreciative for the staff and board of directors of the Three Affiliated Tribes Museum at Four Bears for providing such a great venue for the honoring.