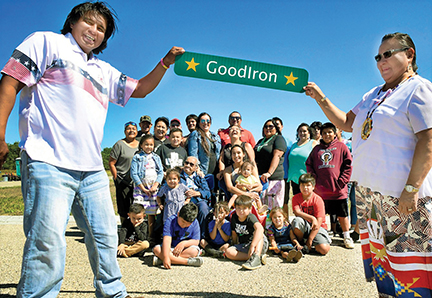 A Mandaree man and MHA Nation tribal member who was killed in action in Afghanistan in 2006 will never be forgotten by his family, veterans and those who honor the sacrifices so many have made while in the military. The memory of Corporal Nathan Goodiron is honored every day by his mother, Harriet Goodiron and on many occasions, his memory is also honored by others in special ways.

Harriet and many of the Goodiron family were in Bismarck last week for a special dedication of Clear Sky Addition, a new single-family housing development in the capital city. Cpl. Goodiron and the 13 other National Guard soldiers who lost their lives in the Middle East wars will have the streets around the site named after them. The Clear Sky and Heroes Park Dedication drew many dignitaries, veterans and family members of the fallen soldiers last Friday.

“It made me feel forever grateful that people still remember my son. What they are doing will be there forever on the monument as well as the signs. It means a lot to me because as a mother, I want Nathan to be remembered in a good way for his sacrifice. It is also nice that the others who died while serving in the National Guard will be part of this great remembrance,” Harriet Goodiron noted.

The idea came from Matt Geiger, a National Guard veteran and construction company owner. Geiger presented the idea to the city and park officials in Bismarck and that led to the dedication and the memorial to the 14 fallen soldiers.

Heroes Park will include a future monument with the names of the 14 National Guard soldiers engraved in stone.