The Wild Horse Stampede Rodeo on the Standing Rock Reservation attracted a cavalcade of rodeo participants and there were some very solid performances in every event. Local riders and ropers represented the MHA Nation very well. 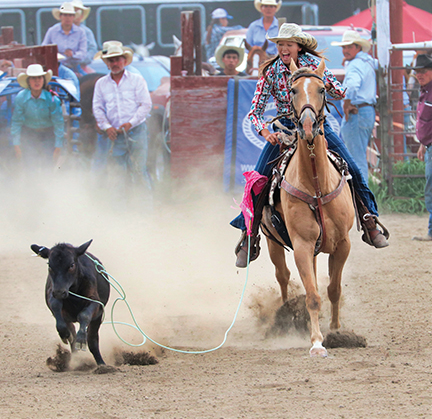 Claiming championship buckles from the local MHA Nation was Parshall’s Mervin Packineau with a time of 2.96 in Senior Men’s Breakaway event. That winning time was up there in what was one of the best times of his career. Jake Longbrake was second with another great time of 3.34.  In Senior Team Roping, Packineau also placed third with partner Jim Baker of Sahnish and the Parshall roper additionally placed fifth in that event with another roping partner, Frank Whitecalfe of White Shield.

Jessee Vigen of Mandaree won a championship buckle in the Ladies Breakaway competition winning in a split second over her sister Hailey Vigen. Jessee’s time was 3.86 and Hailey’s was 3.96. Eskie Heart of Parshall placed third in that event with a time of 13.08.  Jessee Vigen also placed third in Junior Team Roping with her partner Bailey Chase of Mandaree.

Other notables from the area who placed in other categories were Arena Delorme who ropes out of Parshall with her team roping partner Rilee Fisher. The duo placed second in Junior Team Roping. Eskie Heart of Parshall and Maize Two Bears took fourth in that event. Hubert Heart and Don McKenzie won the championship in Sr. Team Roping. Maylee Heart of Parshall places sixth in Barrel Racing and Brandee Brugh of Mandaree placed 7th. Reba Foote of Parshall was in the top ten with a 10th place finish. Jayln Hall of Parshall came in right behind in 11th place.

In Tie Down Roping, Dillon Wickum was the champion with a time of 10.99 and in third place Jesse Chase of Mandaree had a good time of 14.33.