The action drove the spectators and team roping fans to frenzy at times because of the great competition that was battling for big prizes in Parshall recently. The dust and ropes were flying all weekend in both the Healing Horse Ranch and outside and inside arenas in what was a team roping extravaganza in Parshall. The action was great to watch, and there were many top ropers from several states and the local area competing hard for the prizes of trophy buckles and saddles – and there were also some nice cash prizes to shoot for.

The two-day roping event was a chance to get some healthy exercise and much-needed fresh air for all who roped and attended as fans. Nursing professionals and health care assistants performed health screening at the gate, and social distancing and masks were strongly encouraged. 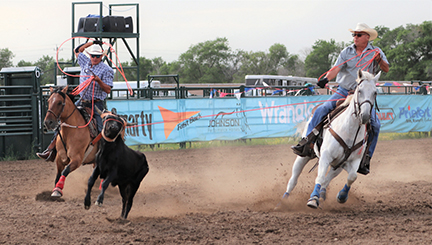 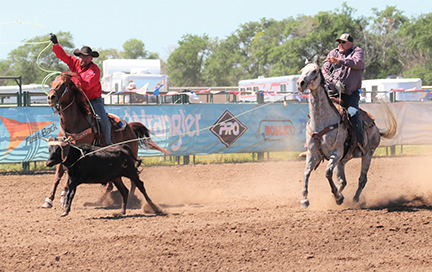 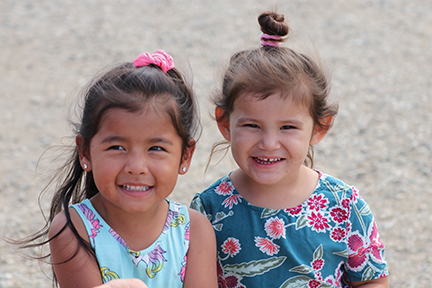 Championship customized trophy saddles were won on Sunday by the team of Arena Delorme of Mandan and Glen Roshau of Dickinson. Delorme is a member of Turtle Mountain Chippewa, but she spends a lot of time in the Parshall area with her father, Toby Delorme. In the other half of Sunday’s exciting roping event, the top prize of trophy saddles went to Jon Keplin and Ryder Keplin of Belcourt, so it was a good day for the Turtle Mountain Chippewa ropers. Winning a trophy buckle and one of the roping partners he drew on Sunday was Mervin Packineau for placing 8th in the competition

In the 8.5 Wrangler Pro Challenge, Ryder Keplin and Jon Jon Keplin won each a customized saddle and trophy buckle for taking the championship, while winning $5,024 in prize money. Eskie Heart of Parshall and Trent Keplin of Belcourt placed 7th and won $1,606 in prize money and each a trophy buckle. Lazaro

Arreola and Mervin Packineau of Parshall placed 8th and earned prize money together of $1,342 toward winnings.

Some of the winners in various rounds were as follows:

In the Cactus and Boulet Challenge, Arena Delorme and Glen Roshau took home a saddle, buckle, and split $3,406 in prize money. Royce Heart of Parshall and Healing Horse staffer Jim Baker placed third and won $2,002 in winnings and each a trophy buckle. Fifth place went to Eskie Heart and Jamison Drecklau, winning $1,500 and a buckle apiece.

Daylon Danks of Mandaree and Justin Whiteman shared over $1,800 in prize money for placing sixth in the FastBack and Smarty Challenge.

In the 6.5 Incentive Pro Challenge, Maelee Heart and Brody Reis placed second and took home $500 to share and a trophy buckle. All in all, it was a long haul to the end of both days with many tuckered out ropers, but many won prizes or cash and the ones who did not truly enjoyed themselves roping with their friends and family members. More females are doing well, and Arena Delorme appreciates the opportunities she has to rope and her mentor/father, who supports her in all she does. Jayli Fimbres of Mandaree also is learning fast in her first year of roping and although Fimbres did not win any prize money or a buckle, she was thrilled to land a perfect throw on the heeling and some great tosses in the times she did the heading in the team roping event in Parshall.

Prizes were sponsored by Makes Cents of Parshall and Northeast Segment.