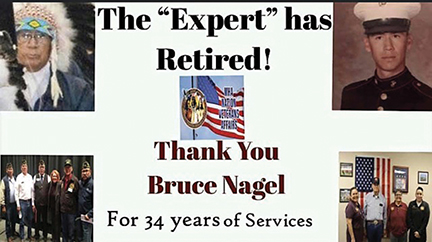 NEW TOWN – Community members gathered on Thursday afternoon at the Veteran’s Center by Elbowoods Memorial Health Center in New Town to celebrate the retirement of long-time MHA Tribal Housing Authority Supervisor, Bruce Nagel. Nagel served as a Surveyor, Estimator, and Road-Heavy Instructor (also wearing many other hats) during his employment with MHA Nation. He worked on roads and building construction for the Three Affiliated Tribes throughout the past 25 years.

The ceremony was organized by many family and friends who also served as guest speakers when mentioning their work-life memories and commented on his guiding ethics and commitment to seeing each job through.

In order to accommodate social distancing, the event took place outside on the pavilion of the Veteran’s Center, and dinner was served in the gymnasium

Lavetta Fox was Master of Ceremonies, and Dr. Monica Mayer, North Segment’s Councilwoman, spoke as to his dedication as both a member and employee of the Tribe.

We have included an interview with our Radio Station Manager, Anne Morsette on Nagel’s words about his early life, and being a student and a teacher before retiring:

I am Bruce Nagel, originally from Elbowoods. We [my family] moved to Twin Buttes after the great flood. Since then and for the past 25 years, I’ve been living in the community of White Shield. I spent my first elementary years in Elbowoods.

From there, my parents were sent on relocation, so I went to school a couple of years out in California in Lawndale. Then we moved back to the Crow Indian Reservation in Pryor, Montana. I spent my junior high years there, and from there, I went off to boarding school – I’m a child of Marty Mission Braves of Saint Paul’s high school in Marty, South Dakota. I’m an alumni of that school. There’s quite a few of us out there but not too many now, because it doesn’t exist anymore as a boarding school. It doesn’t take non-resident boarders.

After boarding school, I went into the Marine Corps and spent some time there. When I came home, I spent a couple of years working on road crews in Montana and here in North Dakota. From there, I moved back to Twin Buttes, where I spent ten years working on the road maintenance department. After that time, the Tribe hired me with the Housing Authority. I have built about 240 homes here on the reservation. I also built a couple of gymnasiums for the Tribe. I was responsible for this building we are standing at, the Veteran Center. From day one, it was a pipe dream that I pulled out of my head and did all the technical work to get it off the ground. I am appreciative that the Tribe allowed me to do this for it.

So, going to school, I might remind everybody – paid off for me. This is because my expertise came in to play when I became involved in these construction projects. When I was working at the road shop for ten years, I was a road-heavy equipment instructor as well as a surveyor.  I did all the engineering and estimating for it; I had a lot of students there also. I’m just hoping that they remember me and consider the good times – that they may have learned something. With that, I would like to thank MHA Nation for the opportunities they have given me, and you have a great day. 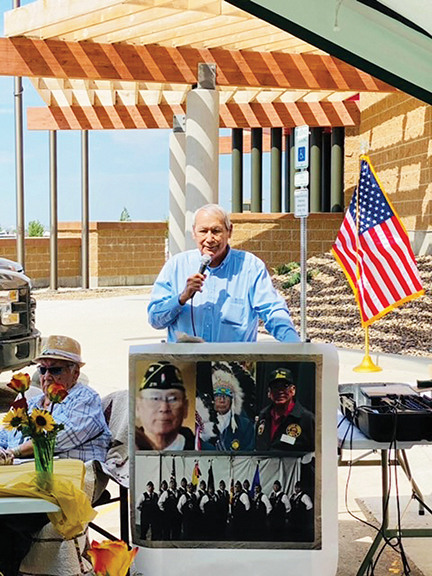 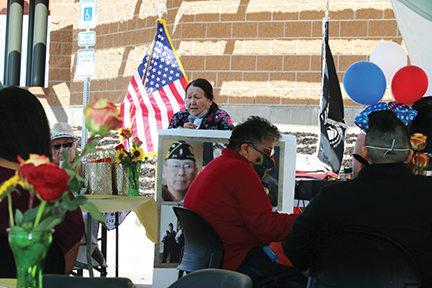 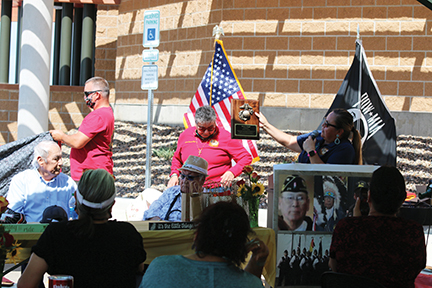 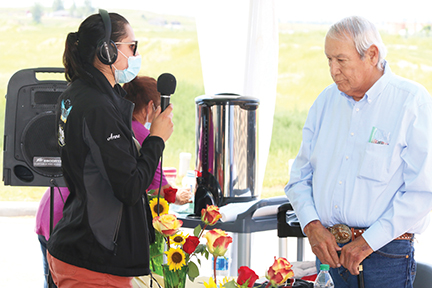 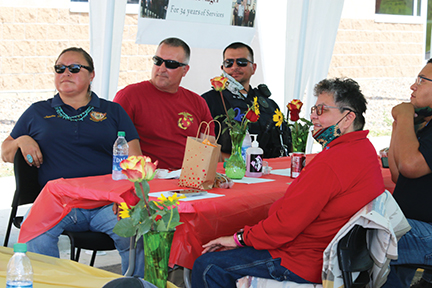