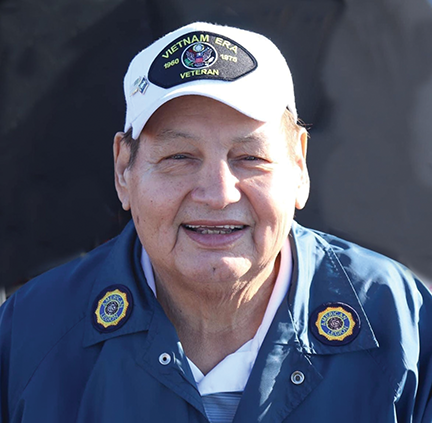 Gerald Dean Fox, “Bear Among Cedars” KuuNUx tiwaraaka’a’ niinataWIsaapaaWI, 78, of New Town, ND, died on July 20, 2020, in Minot, North Dakota, at the hospital, surrounded by family.  Gerald was born in Elbowoods on August 27, 1941 to Jerine Fox-Morsette and Mason Two Crow, a child of the Prairie Chicken Clan. Gerald was raised by his grandparents, George and Edna Fox. He married the love of his life, Vivian Darlene Beston, many years ago and they recently celebrated 44 years together. They made their home in New Town.

Gerald enlisted in the United States Air Force on Feb. 1, 1960 and served four years. He was on one of the earliest Air supply missions, in the Air Force, to deploy and serve in Vietnam in 1963.  He was a proud and life-long member of the Young Hawk Bear Post 253.  He loved to go to our community Pow Wows every year to participate and thank the families of the Veterans, during the Flag Raising ceremony, every morning, and danced with all the homecoming veterans on leave from active service.

In his younger years, he loved to play basketball and his grandfather took him to travel and play in local and regional basketball games. Gerald held a record for high points, during one game, of 54 points which was a state record in which he was so proud of as was his family.  This high score was accomplished before the three-point line was implemented in North Dakota High School sports.  He was also honored to be part of the 1942 Elbowoods tribute and acceptance, of the Class B Basketball trophy, for his Uncle Leon Fox, in the ceremony at Minot State Auditorium, in 2002.  He was proudly part of the PBS Documentary “Basketball, Water and Elbowoods.”

His love for sports never stopped; an avid basketball, baseball, and football fan, he was always a walking statistician for trivial sports information.  A few years ago, he got to go to his first home game of his beloved Green Bay Packers, Go Pack Go!!!  He also loved the Dodgers.  He loved to watch his kids and grandkids play sports. He always made it a point to attend as many games as he could, to support and encourage them from the sidelines, and keep up on their progress on Facebook.

Gerald was a firm believer in the importance of education and talked to his grandchildren about reaching for the stars academically. From 1996 to 1999, to serve as an example to them, he began his higher education, studying Social Work with an emphasis on Learning Disabilities. In July of 2000, Gerald received his bachelor’s degree in business education, and vocational rehabilitation from Minot State University. In collaboration with San Diego State University he was just 12 credits short of a master’s level degree. This helped him in his professional career, in helping others while he was a Vocational Rehabilitation Counselor for Three Affiliated Tribes.

Gerald’s smile was contagious, and he had the whimsical curiosity of someone much younger than his distinguished age and he always had so much love for his family and his friends. He often told stories of his and Grammas younger years when they would travel to see concerts, baseball games, or other sporting events.