Arson reported at the 4 Bears Marina 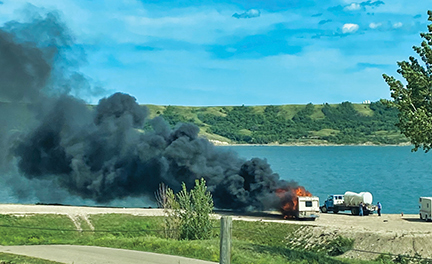 New Town, ND – On Wednesday afternoon, July 15th, employees leaving the KMHA/MHA Times building at 601 Lodge Road in New Town, heard screams coming from the direction of the 4Bears RV Park and Marina. Apparently, a suspect had set numerous RV campers and motorhomes ablaze as well as had vandalized numerous campsites. The Four Bears RV Casino & Resort was on lockdown for several hours and individuals were not allowed to leave the resort or cross roadblocks as law enforcement and fire crews worked tirelessly to extinguish the fire and apprehend the reported suspect. Three bodies of governing law enforcement are working the case.

Janna Steen and Christopher Church, a married couple living in New Town, suffered a total loss from the reported first RV fire. Church is an enrolled member of the MHA Nation. Steen has lived in New Town her entire life and her family is from here.

We parked our RV down by the lake for the 4th of July, where we and our family have been parking for over 15 years now and we have never had an issue. We took our motorhome out earlier in the day, and there was nothing wrong with it – then all of a sudden, one of my friends posted on Facebook, “There’s an RV on fire!” I looked at the video and it was our RV. My husband and I ran down to the park and by the time we got to the site, it was gone – nothing but ashes. The fire crew was there but the diesel and propane accelerants had destroyed it quickly.”

She further offered, “The police can’t tell us anything other than, “The investigation is ongoing”. They did not tell us who the suspect is but only that they had caught him and he’s arrested. They questioned us with, “Do you [we] know him?” or “Why would this happen?” and we said, “This didn’t have anything to do with us,” and, “We don’t know who he is”. 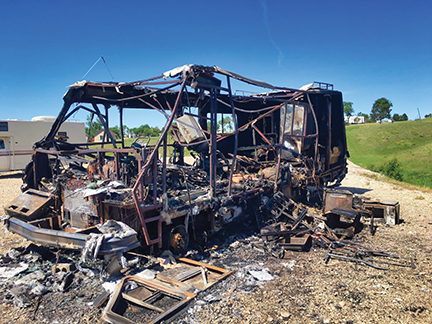 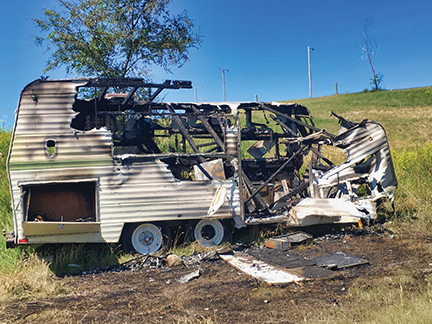 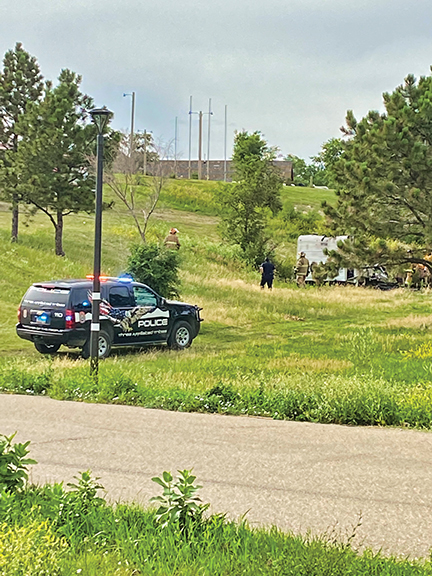 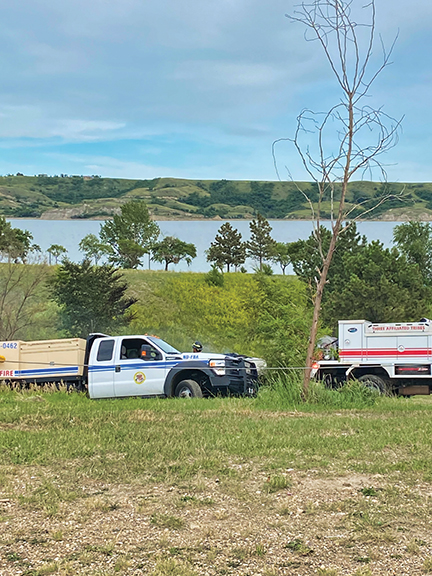 The Church family had full tanks of diesel and propane so the fire could not be extinguished before the structure was destroyed. After piecing together what happened, the suspect had also visited Janna’s mother and father-in-law’s RV and, “Busted out their windows.” He went on to Janna and Chris’s RV and must have seen no one was around, so he went inside and set it on fire. “There was just no stopping it and we lost everything. My mother passed away and I was using the backroom for storage and all of her memories – every picture, every Christmas card, every handwritten letter that I had kept, is gone.”

Steen’s mother passed away six years ago and her entire effects were in the camper. “Our house is really small so we didn’t have any room anywhere to put the things except for in our camper. There were two totes and a duffel bag; all of her things like; sentimental memorabilia, little knick-knacks, handwritten cards and letters as well as her birth and death certificates – all things that cannot be replaced – but those are the things that meant the most to me. She further added, “I get it, material things can be replaced and I’m not upset so much about the RV, but everything that I own of my mother’s memory and all of our camping supplies, our generator – was inside and we lost everything.”

Steen is a full-time college student and Church graduated with a degree in May. They are in-between education and employment at this time, “We don’t cause problems and we didn’t do anything to cause this to happen – We don’t provoke situations; it’s really hard to wrap our heads around it. We have a six-year-old and my husband and I have tried so hard to obtain a peaceful life for ourselves. This is something that has hit us really hard. We didn’t have insurance with the whole Coronavirus Pandemic, as everything has been really tight financially. We were just starting to get things back together. Again, this guy just goes and does this and just “because”. She asked, Where is the fairness in this?”

The Churchs were not the only family whose RV was set on fire and burned to the ground as another local family suffered a similar loss, as well as three other campers and campsites, were vandalized.

The Churchs’ have a PayPal account paypalme/jannasteen13 and they have provided information for anyone who may want to contribute with the following message:

When we first got together [four years ago] we didn’t have a lot and we were homeless and living with family and friends. Christopher’s best friend and mentor was an older gentleman named Myron Sitting Crow, an Elder from another tribe. My husband being a mechanic, was working on his vehicles full time and Myron knew what position we were in; no place to live and little money. Due to this, he offered up the motorhome to us as payment for my husband’s mechanical work. This is how my late mother’s effects wound up in the RV.”

Steen further went on, “In regards to restitution, we were told he doesn’t have a job or finances so there is probably no money for restitution coming from the ‘suspect’. I don’t understand how somebody could do something so horrific to someone else without even thinking about how it affects us. It’s a really hard situation to be in – to try to remain hopeful that something will happen to turn this around. The worst part about this is, the police told us we had to get the RV out of the park because it’s affecting the park. A tow company quoted us a price of $500 to have the RV towed from the park. We just lost everything in the trailer but now we have to try to come up with the money to get it towed out of there.” (As readers may remember when we reported the story about Angela Hino Josa, who lost her RV to a tornado the week of July 4th, part of the struggle was coming up with funding to move the RV out of the park after damage).

“We’re having difficulties right now trying to piece together everything and so the past 24 hours has been really hard. We’ve never been the type of people who’ve ever asked for help. We were given no information on it. They won’t tell us what he’s being charged with, and they are (law enforcement) basically, giving us no answers at all,” Steen confided.

MHA Times has contacted the 4Bears RV Marina in New Town and was told the RV Park and Marina Management could not comment at this time. We also contacted Special Agent, Gary Sams, who is working the case for the BIA (Bureau of Indian Affairs) – MHA Times was told he also cannot comment. We are, however, awaiting a call back from the MHA Nation’s Chief of Police, for an accurate count toward the damaging acts of arson and vandalism on July 15. We will report more information as it becomes available.

It is reported the suspect was spotted about an hour later on the east side of the 4Bears Bridge after being dropped off in a silver vehicle. It’s also reported, police arrested him as he was walking along Main Street in New Town and he is being held at this time at an undisclosed location with bail undetermined. Officer Cruz reported to Steen, “A bail hearing will be held on Monday, July 20th or Wednesday, the 22nd with all pertinent identifiers and information released to the public at that time.”

**Lt. Mathews from Mckenzie County law enforcement contacted out editor and reported  that on July 15th, his department responded to calls regarding an incident at 4Bears Marina and shorlty thereafter the BIA took over the investigation and the case is now being handled within the BIA’s jurisdiction. He further stated that he cannot comment on an investigation being handled by another department.