An Elders Account of Life Before Garrison Dam Flooding

New Town, ND – On Friday, July 10th, I had the pleasure of talking with my eighty-eight-year-old Grandfather, John Danks Sr., an Elder of the MHA Nation. He lives west of New Town, North Dakota in the Four Bears Segment but he grew up in up in Raub and Elbowoods. My Grandfather (I’ll refer to him as John hereafter, as Danks is too impersonal for me) was born in 1932 to Morris Sr. and Clara Danks at the only hospital in Elbowoods. Interestingly, he was the first baby to be born at Elbowoods. As a side note:

In 1948, the construction of the Garrison Dam caused the Three Affiliated Tribes’ Elbowoods Hospital to be submerged. The U.S. made a commitment in 1949 to the Three Affiliated Tribes to replace all infrastructure lost as a result of the flooding associated with the construction of the Garrison Dam and Reservoir. (https://www.nlm.nih.gov/nativevoices/timeline/631.html) 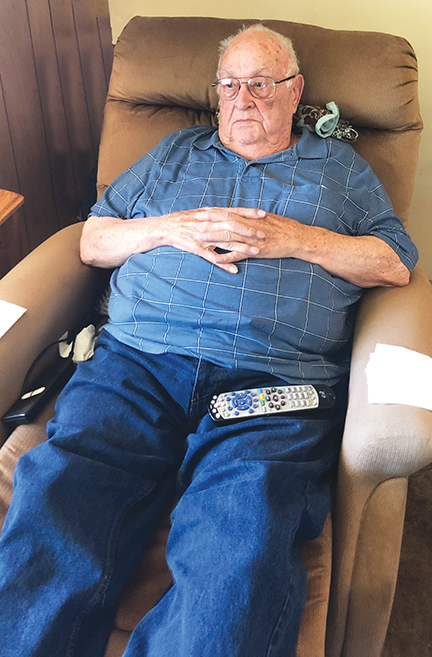 When asked where he lived below the now flooded reservoir, he replied, “I lived straight North of town (Elbowoods) about a mile. My grandparents lived a mile away from my house also.” John first attended school in Elbowoods with his older brother, Morris, ten years his senior, when he followed his brother to school a few times and continued “showing up”. He was not old enough to attend school yet and there was not a Kindergarten grade in rural North Dakota in those days. Once his mother tried to withdraw him from 1st grade, even though he wasn’t five-years-old yet, the teachers pushed back and told her he had adjusted quite well despite his young age – so she let him continue. This led to many years of education to follow for John.

Elbowoods is no longer – as it was one of the many small towns that are now located under Lake Sakakawea. Lake Sakakawea is a part of the Missouri River as mentioned above, the lake was made as a result of the reservoir effect of the Garrison Dam. In the early 1950s, government officials built the Garrison Dam for hydropower electricity, and unfortunately, a by-product of that action meant the Fort Berthold Reservation and small towns along the Missouri River would have to be completely abandoned or flooded.

John described the town of Elbowoods itself:

[It] only had two stores; one being a grocery store, and the other, being a clothing store. The clothing store, I remember, provided a lot of material for sewing clothes and household goods which was what the majority of the people did at that time. And there was a school. I think there was more than one school (John Danks, SR. didn’t expand upon the second school further)

Elbowoods was located South of the Parshall/Whiteshield area. Contrastly, the town of Sanish was originally located below the water by the Four Bears Bridge in the New Town area.

John attended many schools and continued to speak of how he moved around to the many schools to acquire a full education. He attended high school in Dickinson, where he played football on a team called, ‘the Dickinson Savages’ allowing him to graduate at the early age of 17, and at the same time, earning a scholarship to Oklahoma College.

Upon graduation, he returned home and helped his dad on the ranch. He offered that his dad had the only thrashing machine in the area which makes a big straw stack before it combines – shocking the grains and piling them in stacks. From there, they would haul them where they needed to go. “We would go through the neighborhood thrashing like a little business,” he offered. John would eventually meet his wife Theresa Youngbird Danks.

He held many jobs which he would end up having to move a lot in order to perform the work on-site. He tried to get a job with the Bureau of Indian Affairs but he didn’t have enough native blood. Back then, you had to have a quarter of native blood in order to work for the Bureau. As an alternative, he went to Minot and sat for the Federal Entrance Exam and his qualifying score landed him a job with the Bureau of Indian Affairs in Cheyenne river where they had just received flood compensation funding and had a large credit cooperation program along with a repayment cattle program. He became a Creditor for that cooperation.

His work continued to allow for travel as he moved around to other reservations affected by the flooding caused by the Garrison Dam project. He eventually relocated to pine ridge for one of these jobs and I asked him, “How was Pine Ridge at this time?” and he answered, “It was pretty western.” Ultimately, John Danks would retire from his government job and moved to New Town where he bought land to the west and built his house with his son, John Danks Jr. He started ranching and fathered seven children; Debbie Danks, John Danks Jr., Caroline Danks, Delphine Danks, Kayla Danks, Paul Danks, and Richard Danks.

He remained married to Theresa until she passed away on August 9th of 2019. He continues to live in his house which he and his eldest son built and where he raised his children and hosted countless holiday gatherings with his family. I feel very fortunate to have the pleasure of listening to his story and would like to share his story with others who may find it interesting.